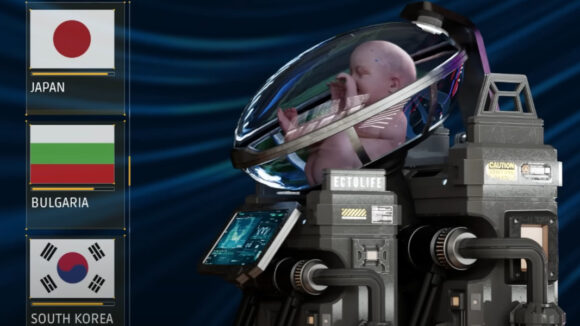 When discussing the merits of a piece of art, it’s often asked if the final product makes good on the artist’s intentions.

In the animated short EctoLife: The World’s First Artificial Womb Facility, the answer seems to be a resounding, “Yes,” as thousands who have seen the short were convinced of its authenticity even though all footage of the “facility” in the video is clearly animated and it plays more like a Love, Death + Robots or Black Mirror episode than a Nova special on PBS.

The viral film has 1.7 million views since its premiere on Youtube a little over one month ago, and more than 12,400 comments in dozens of languages which range from incredulity to outrage to disgust. Many of the comments are from users who were convinced that the technology represented in the video is real, despite the exceptional claims made by a robotic-sounding narrator who uses frighteningly dystopian vocabulary to describe technologies that are more science fiction than science fact.

EctoLifo was posted by Hashem Al-Ghaili, who identifies himself as a producer, filmmaker, and science communicator based in Berlin. According to his website, Al-Ghaili is a molecular biologist by trade with a degree from Jacobs University Bremen who “uses his knowledge and passion for science to educate the public through social media and video content.”

The reception to the film became even more polarized and argumentative after people swiped it from Youtube and started spreading it on social media platforms like Facebook. Al-Ghaili spoke with AFP Fact Check and explained that the video is a film he produced as a concept and that users sharing it online as if it were real were doing so “out of context.” That being said, Al-Ghaili offers no such context on either his Youtube channel or his website, where the video is presented as if it were authentic.

It could be argued that the claims in the video should be enough to convince viewers that the technology shown is not real. It could also be argued Al-Ghaili could have helped avoid some confusion if he had included a disclaimer stating as much when he posted the film. In most ways, Al-Ghaili is more of a filmmaker than his self-described status as “science communicator,” which adds to the confusion over his work.

In any case, Al-Ghaili told AFP, “EctoLife is not a real facility and there is no work being done to create the prototype as of now. The video is intended to showcase how far science and reproductive technology have progressed and initiate the discussion around such technology.”

When judged solely on its artistic merit, Al-Ghaili’s work is impressive. (Disclaimer: We’re not scientists and offer no endorsements for any of the claims made in his videos). The shorts also demonstrate that animation can be a powerful tool in advancing discussions around science and technology, for better or worse. He’s amassed millions of views on videos about biology, addiction, exploration, and much more, including a concept for a nuclear-powered sky hotel and a trailer for a sci-fi feature film he’s working on called Orbital.

Pictured at top: A still from EctoLife: The World’s First Artificial Womb Facility