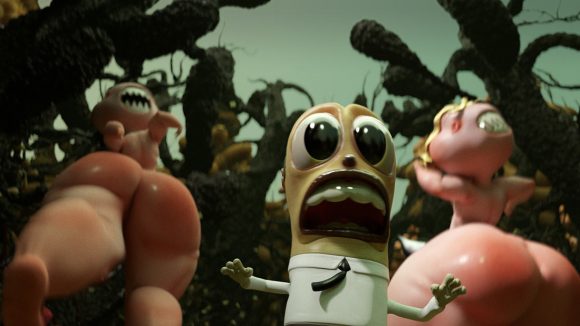 It’s a great year for animated shorts, and this year’s Ottawa International Animation Festival presented quite a few of the year’s strongest films. Below are four of my favorites from the festival, all of which are currently playing the international film festival circuit. Keep an eye out for them at a festival near you.

The rare 15-minute abstract narrative that actually leaves you wanting more, Marta Pajek’s Impossible Figures and Other Stories II is a gorgeous piece of hand-drawn animation. Pajek told me that the film is designed as a triptych, and this is the first installment.

The protagonist of the film is a woman who trips and falls, while rushing around the house. She gets up, only to discover, that her home has unusual features – it is built from paradoxes, filled with illusions and covered with patterns.

A surreal story that is perfectly matched with a surreal cut-out style that transfers uncomfortably familiar human characteristics onto a badger. The film doesn’t have a trailer online yet, but it does have a Facebook page.

A badger lies motionless on a local road. A police patrol approaches the body in the dark. They soon realize that the animal is not dead; the badger is dead drunk! When the police attempt to drag the creature off the road, he wakes up and things take a strange turn.

Igor Kovalyov slyly uses the language of Hollywood filmmaking to craft psychological explorations of human nature. Before Love is one of his most artistically ambitious and beautiful films to date.

Before Love questions solitude, misunderstanding and disunity in our life. The title suggests that everything happening to the characters is not a true love yet. Human shortcomings tie the dramatic knot of the story. Everybody finds his way to be unhappy. Everybody is looking for love.

The Absence of Eddy Table
Directed by Rune Spaans (Norway)

Dave Cooper’s singular style isn’t easy to adapt into animation, but The Absence of Eddy Table makes a valiant effort, crafting a distinctive CG universe that feels special, if not necessarily a one-to-one copy of Cooper’s artwork.

What if your worst fear and your greatest love turn out to be the same thing? Lost in a dark forest, Eddy Table stumbles upon a mysterious girl and dangerous parasites. Based on the works of cartoonist and designer Dave Cooper, who also wrote the script.