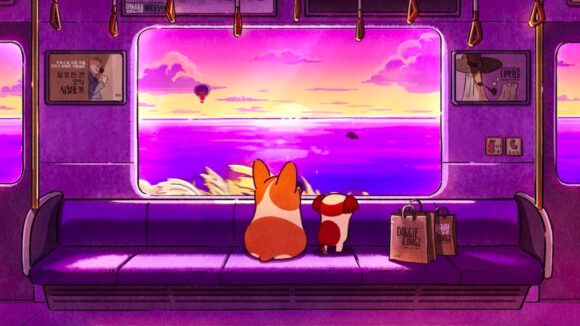 Are you worn out by work? Strung out by the frenetic pace of social media? Pleasantly stimulated by highly specific ambient sounds? If the answer to any of these questions is “yes,” congratulations: you fall within the target audience of Doggie Corgi.

This Youtube channel, the brainchild of South Korea’s Studio Goindol, is simple in concept — indeed, simplicity is the point. In its videos, which total a few dozen, a cute cartoon corgi and his pooch pals are dropped into various calming scenes: an Alpine picnic, a stroll through a suburb, a sunset train ride along the shore. In looped animation cycles, they frolic and relax, as soothing instrumental noodling plays on the soundtrack. The channel has proved popular, its videos racking up hundreds of thousands of views.

Goindol’s president Jeongsoo Hur tells Cartoon Brew why the channel was launched in the first place:

We wanted to give people this message: “It’s okay. You are doing good.” Life flies by faster and faster, and all of [us] are so tired to chase what is constantly changing and running away from us… The goal of the Doggie Corgi episodes [is] to have people to feel warmness and get comfortable while just gazing at the animated, slow, sentimental scenes in the middle of busy screens filled with flashy effects and edits wherever they go.

There are variations on the format. Some videos show a “time-lapse” of a background being colored in, apparently by the corgi himself — in one, the setting is the bakery from Hayao Miyazaki’s Kiki’s Delivery Service. Others are pitched as “ASMR animations,” a reference to the phenomenon whereby some people derive enjoyable tingling sensations from highly specific auditory and visual stimuli. (ASMR stands for the non-clinical term “autonomous sensory meridian response”; this Vox explainer has more on the subject.)

The ASMR videos on the Doggie Corgi channel accordingly emphasize certain sounds. The studio stumbled on this subculture accidentally, as Hur explains:

Our original purpose is to provide a relaxing background music for people to just let it play accompanied by soothing animation… As the episodes got shown to people around, we received feedback that they want to hear what’s going on in the scene as well. So, we wanted to provide a real delicate ambient sound of the scene.

Frankly speaking, [our soundtracks are] not really an ASMR content, but more like an ambient sound. But ASMR’s definition in [the] content-consuming world constantly evolves and people start to view highly sensible audio content as ASMR. We haven’t talked to the “real” ASMR people yet, but if changes and equipments allow, we would try something really meaningful as ASMR content.

Awareness of ASMR has gradually spread over the years, and a broad range of Youtube videos now cater to people who experience it. However, most of those videos feature live humans performing actions known to trigger the sensation; ASMR animation remains a pretty small field. We’re curious to see how other artists harness the medium for this purpose in the future, and particularly how they explore the visual cues for ASMR.

The dogs were designed by Greengrin, an artist at Goindol, as a pet project (pun intended). “These four characters are Greengrin’s creations and at the same time the ones who fill in his loneliness,” says Hur. Greengrin is closely involved in the videos’ production, and the studio is planning to develop the characters into a multimedia franchise comprising web comics, interactive content, a tv series, and a feature film. Doggie Corgi already has its own Instagram account.

Founded in 2001, Goindol specializes in 2d animation, handling pre-production for a range of commercial projects. The company works closely with Synergy Media, a cg studio also based in South Korea. The two partnered with Turner Broadcasting to produce the series Beat Monsters, which has aired on Cartoon Network EMEA and APAC. Goindol is currently working on Synergy’s feature Fly, Superboard, as well as various tv series. Says Hur:

We always strive to develop something new and fresh. The current Korean animation industry is dominated by toy-based shows which limit the roles and rooms of creators. And we are trying to change that a little by little everyday.