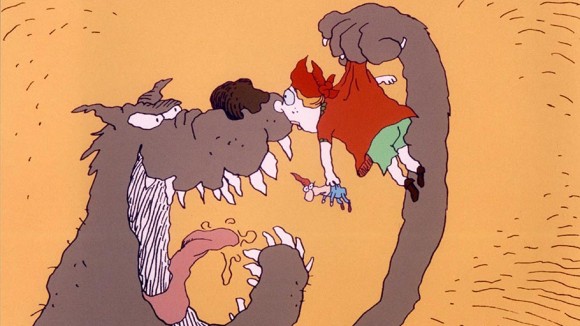 Today marks the 75th birthday of Dutch director of animated shorts Paul Driessen, a true icon in indie animation. Every one of his twenty-five-plus shorts manages to be both distinct from the others and instantly recognizable: for their strange worlds, whimsical characters, bold linework, high-concept execution, and inventive use of the frame.

With a career spanning half a century, Driessen has been most of his working life with the National Film Board in Canada. And he has no intention of stopping: Driessen has already moved on from his latest film Cat Meets Dog to develop two new projects.

Cartoon Brew recently caught up with Driessen to chat about his work (past, present, and future), his inspiration, process, animating on Yellow Submarine, and not looking back.

CARTOON BREW: Your concepts are always out of the ordinary. How do you come up with your ideas?

PAUL DRIESSEN: The emergence of my ideas has absolutely nothing to do with everyday experiences. When I want to find an idea, I have to sit down and think. I go to a nice place, like the beach, and start writing in a little booklet. I never draw my ideas, I write them down. I’m very well acquainted with my style—I don’t have to draw something to know how it will look. Simply writing the actions down goes much faster than drawing them, so it speeds up my thinking process. It’s pretty fun too—I have tiny handwriting, so I’ve written down whole scripts of ten-minute films on a single piece of paper.

CARTOON BREW: Your animation career started in the 1960s, which wasn’t a strong time for animation coming out of the Netherlands. Where did you pick up the craft?

PAUL DRIESSEN: It was around 1964, when commercial television was about to take off in the Netherlands. In the newspaper I read an article about Cinecentre, a big film company near Amsterdam that had opened a small animation department. Honestly, I had no idea what an animator did, but decided to apply for a job with my comics under my arm. Jim Hiltz, an American animator that headed the department, liked what he saw and hired me.

Jim was shy, like most animators actually. He didn’t say anything, but I could take a good look at his animation techniques. At the time, there weren’t many books, no schools. If you wanted to learn how to animate, you simply had to have good animators surrounding you. Jim was a terrific animator, a typical UPA man. His work was short and dense—simple, but awfully well animated. I drew very simple myself and Jim encouraged that.

CARTOON BREW: Just a few years after you learned the craft at Cinecentre you moved to England, to work on the Beatles’ feature-length animated film Yellow Submarine. How did you end up there and what was it like working on the movie?

PAUL DRIESSEN: Five years after Jim started Cinecentre’s animation department, his taxes increased a lot. He returned to America and the studio collapsed. Meanwhile I had been in touch with George Dunning, a Canadian animation director working in England. George and Jim were friends, so George had visited Cinecentre every once in a while. He had seen me animate, and told me to join his crew in London if I ever wanted to leave the Netherlands. So when Cinecentre collapsed, that’s what I did.

Yellow Submarine was a weird project. The American production company simply wanted to recreate the success of the Beatles television series—which was very ugly, but very popular—into a feature-length film. But George, Yellow Submarine’s director, was an artist. While the Americans wanted quick and cheap, George wanted beautiful and unique. It made for a constant struggle. Production was one big mess. We worked with a small team—25 animators, two or three camera people, and an ink and paint department—and the film had to be finished in nine months, at most. Miraculously, we made the deadline. So my time in England was confined to those nine months.

CARTOON BREW: Your animated short The Story of Little John Bailey (1970) [watch below] is one of the Netherlands’ very first independent animated shorts. How did you manage to make it?

PAUL DRIESSEN: It wasn’t really clear at the time how one could get funding for an animated short, but my colleague Rupert van der Linden managed to [for The Flowers, 1967], so apparently it was possible. I was granted a small budget for The Story of Little John Bailey. I had just gotten married, owned very little money, and didn’t own a house yet. So my then-wife and I got in my small Fiat car and drove to Spain, simply because the rent there was low. In Spain I managed to make The Story of Little John Bailey on a tight budget.

CARTOON BREW: How do you feel when you look back on your many animated shorts? Do you have a favorite one?

PAUL DRIESSEN: During a retrospective of my work I’d prefer to walk out of the room. Once a film is finished I’m not interested in watching it myself. The process, with all its different stages, is the fun part for me. As soon as that’s over, I don’t look back. Consequently I don’t really learn from my previous mistakes. I regret that sometimes, but then again each of my films is different, so there’s no point in learning from the previous one.

Once a film is finished I’m not interested in watching it myself. The process, with all its different stages, is the fun part for me.

With that said, I guess my favorite film would be The Boy Who Saw the Iceberg [2000]. The split screen is very well thought out, the music works well, and it’s one of my few films that actually evokes emotion. It’s a pretty sad film. The Canadian producer at the time, who was an American originally, tried to get me into giving the film a happy ending. But I’m glad I didn’t give in. The Boy Who Saw the Iceberg is the only film of mine that moves people to tears.

CARTOON BREW: Do you keep the audience in mind while making a film?

PAUL DRIESSEN: No, never. Of course I enjoy it when people laugh when they see the finished film. But as soon as you try to be funny for someone other than yourself, you’re selling your soul. I take my work too seriously to do that.

CARTOON BREW: Cat Meets Dog is one of your many co-productions between the National Film Board of Canada and the Netherlands. Can you tell us something about your time at the NFB and what has changed?

As soon as you try to be funny for someone other than yourself, you’re selling your soul.

PAUL DRIESSEN: At the time I was accepted into the Film Board [in 1972] it was a federally funded institute with a big budget. They had a permanent staff of directors, like Norman McLaren and Co Hoedeman, who earned a fixed salary. Some directors honestly didn’t do that much for their salary! [Laughs] Times were changing and the NFB had opened its door for talent from outside the country. The young newbies, like myself and Caroline Leaf, worked freelance and created a lot, fast. We won many prizes, at one point even more than the staff directors. It was an exciting time for me. Many of my films are produced by the NFB, but if they didn’t like a concept or if they found it was someone else’s turn, then I’d go to the Netherlands to fund a film there.

In the last 20 years there have been big cuts in the NFB’s budget, so with Cat Meets Dog they don’t have money for me anymore. Luckily I have the advantage of being Dutch, so the Netherlands is paying my fee. The NFB handles editing—or rather, they were supposed to. Cat Meets Dog has a tetralogy design and at some point in the production the NFB deemed it too difficult. They asked me, “Don’t you have anything normal for us?” So my Dutch co-producer il Luster offered to take over the editing part of the film. I think the Film Board might have been a bit offended. The Board has been one big family to me, but I think my time there is coming to a close. I actually think they’ll be quite happy to get rid of me. [Laughs] I want to do things they don’t really want to do.

CARTOON BREW: Your style of editing seems quite challenging. Do you lock the edit in the storyboard phase or do you still play around with it during production?

PAUL DRIESSEN: Making storyboards for my films is always terribly difficult, because so many things are happening in different frames with different timing. So I start animating when the film is working just fine in my head. When we get to the editing phase and it turns out that what was in my head doesn’t work, I am a little bit disappointed. But I learned not to value every frame, and simply throw out or exchange frames here and there until the very end of the process. For my latest short Cat Meets Dog I think one third of the animation has been edited out. Editing is a game, a puzzle. I enjoy the experiment.

CARTOON BREW: Have you ever considered making a series or feature-length film?

PAUL DRIESSEN: I did write a feature film once, but if you’re going to direct a feature film, you’re essentially a manager. As for series, you’re making the same film over and over again. What excites me about short films is that they’re all different.

CARTOON BREW: What are your plans for the future?

PAUL DRIESSEN: I’m developing my next film. It’s called Disgusting Sounds People Make and it will exist out of around 30 pieces of 15 seconds, drawn in different styles by Dutch and Belgian illustrators/animators and myself. I’ve tried to find a Canadian co-producer for the project, but Canadians don’t like physical nastiness. I couldn’t even get Canadian animators to work on the film, let alone find funding for it there. Luckily Dutch and Belgian people love this kind of humor.

I don’t have to make films anymore—I have a modest pension—but I enjoy drawing. And of course I could sit at home and just draw for myself, but that doesn’t interest me at all. I never draw without a reason. There has to be a production behind it, with a producer on board. Otherwise it feels like a waste of time. I thoroughly enjoy animating, but it has to be for a film that’s worth making.

CORRECTION: An earlier version of this interview inaccurately quoted Mr. Driessen‘s comments about the directors at the National Film Board. This has been amended.