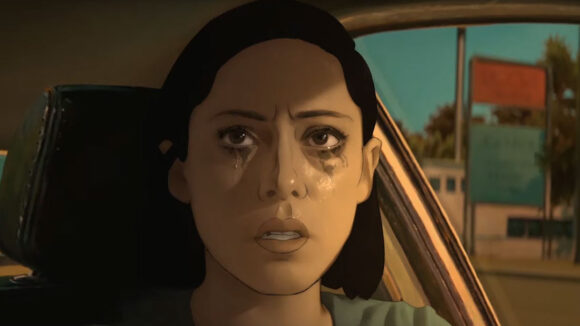 In commercial animation, it’s not too difficult to identify something new and unique because it’s a cut-and-paste kind of business where everyone follows established patterns. But Amazon Studios’ first teaser for its upcoming show Undone isn’t cut from the same cloth as typical series. Even in its brief 40-second length, you can feel something special happening, both tonally and visually.

Described as a “genre-bending animated series that explores the elastic nature of reality,” Undone was co-created by Raphael Bob-Waksberg (creator of Bojack Horseman) and Kate Purdy (a writer on Bojack). The story centers around Alma (Rosa Salazar), a 28-year-old living in San Antonio, Texas, who discovers she has a new relationship to time after nearly dying in a car accident. She learns to harness this new ability in order to find out the truth about the death of her father (Bob Odenkirk).

The visual style of the series mixes rotoscope with oil painting backgrounds. Credit to Hisko Hulsing, production designer and director of the series, for giving the project both a cinematic and handcrafted look, and turning rotoscope into a palatable technique. It certainly shouldn’t be a surprise that the show appears as interesting as it does – Hulsing is a well-regarded Dutch name in independent animation who has directed powerful shorts like Junkyard and Seventeen, as well as the striking animated segments in the 2015 documentary Kurt Cobain: Montage of Heck. This could be the breakout project that finally brings Hulsing the mainstream recognition that he should have gotten years ago.

Production on the series was handled between Amsterdam-based Submarine and Austin, Texas-based Minnow Mountain. Michael Eisner’s Tornante Productions and Amazon Studios produced the show. Bob-Waksberg and Purdy are executive producers alongside Noel Bright, Steven A. Cohen, and Tommy Pallotta.

The first couple episodes of Undone were previewed yesterday at the ATX TV Festival in Austin. The half-hour series will debut on Amazon Prime Video later this year.