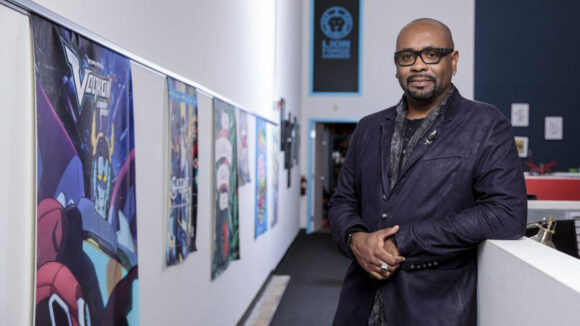 We never expected this to become a trend, but David Steward II is now the third son of a billionaire to launch his own animation studio, following in the footsteps of Travis Knight’s Laika and David Ellison’s Skydance Animation.

Steward, whose father is a tech entrepreneur and majority owner of World Wide Technologies, is doing things differently by setting up Lion Forge in St. Louis, Missouri. While a few significant Midwest studios have produced entertainment content for Hollywood in the past, notably Chicago’s Startoons and Columbus, Ohio’s Character Builders, the region has not traditionally been known as an animation production hub and it could prove challenging to draw top-tier industry talent (i.e. LA artists) to the region.

Steward, however, believes that setting up in the Midwest holds some advantages over animation production on the coasts. “St. Louis is the perfect place from a creative standpoint,” Steward recently told Forbes. “You can find yourself in a bubble in LA or New York. If you want to be in touch with what’s going on in the country, the Midwest is the litmus test of what’s popular in broader sense.”

Lion Forge also sets itself apart in another way since Steward is African-American. If the studio takes off, Steward could soon be the owner of America’s largest black-owned animation studio, which remain an unfortunate rarity in the industry.

Steward explained to Forbes that his studio’s animated productions will be based on Lion Forge’s existing comic content, though he doesn’t rule out the possibility of original productions: “Our IP is fertile ground for animated content. Some we’re creating exclusively for the animation side, but all our projects will have a publishing foundation. We want to think about these concepts being integrated across media.”

In the same Forbes piece, Lion Forge co-founder and chief creative officer Carl Reed, who is heading up the new animation division, added that they’re aiming to create animation that will be different from most studios: “There’s a need for diversity of content – content that challenges expectations, non-traditional formats and creators. We’re used to blazing those trails. The success of films like Black Panther has dispelled the myths that content featuring African-Americans doesn’t play worldwide, and we want to make sure that we develop those concepts with authenticity.”