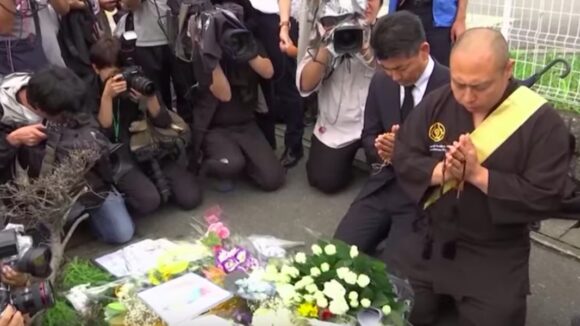 Over the weekend, more information emerged about the fire that devastated Kyoto Animation’s studio last Thursday. Since Cartoon Brew first reported on the incident, the official death toll has risen to 34, and the first details of the suspect and victims have come to light.

While the names of the dead have yet to be confirmed, it’s now clear that they were predominantly young and female: 26 were in their 20s and 30s, and 20 or 21 were women (one victim’s gender remains unconfirmed). In addition to the dead, an additional 34 people were injured, some critically. Of the 70-odd people in the building, a few managed to escape by jumping from balconies. Names of the victims have not been released yet by Japanese authorities.

Police have stated that they suspect 41-year-old Shinji Aoba of arson. According to eyewitness accounts, Aoba walked into the company’s 1st Studio Building last Thursday morning, carrying 40 liters of petrol and a bag full of hammers and knives. He allegedly shouted “Die!” as he doused the building in petrol and set it ablaze.

The fire spread swiftly through the building. NHK, Japan’s national broadcaster, notes that its spiral staircase may have acted as a funnel, sending the fire upward, and that the quantities of paper in the rooms will only have encouraged the flames. Many bodies were found on the part of the staircase leading to the roof. The door to the roof appears to have remained shut; an employee who survived the fire told The Japan Times that he’d found it “hard to open” in the past.

Aoba was found fleeing the scene, badly burned. When caught, he is said to have complained that Kyoto Animation — or KyoAni, as fans call it — “stole his novel,” adding that he wished to speak to the company’s president. Local media report that someone who matches his description was spotted a few times in the vicinity of the building, and also near KyoAni’s head office and 2nd Studio Building, in the days before the fire. He is currently unconscious in a hospital; police are waiting for him to recover before formally arresting him.

Media have started reporting on Aoba’s background, painting a picture of a disturbed man. He was being treated for an unspecified mental illness, and had previously served three-and-a-half years in prison for robbery, according to Japanese national broadcaster NHK. Neighbors say he regularly caused trouble where he lived in Saitama, eastern Japan, going as far as to make violent threats — more details can be found in The Mainchi Shimbun’s report.

Hideaki Hatta, who cofounded KyoAni in 1981 with his wife Yoko, told reporters that the company had recently received anonymous death threats by email. KyoAni ran a talent-scouting scheme, the Kyoto Animation Awards, through which it solicited unpublished writing for potential adaptation. Hatta clarified that his company has never employed Aoba, nor received any novel under his name.

“I am heartbroken. It is unbearable that the people who helped carry Japan’s animation industry were hurt and lost their lives in this way,” said Hatta. He added that he’s considering establishing a memorial park on the site of the fire. For now, the building remains standing, although it has been boarded up to ensure that the scene of the suspected crime isn’t tampered with.

KyoAni stands out in a number of ways. Located in Uji, a suburb of Kyoto, it is removed from the animation hub that is Tokyo (although it has an office there). Yoko Hatta hired local housewives in the studio’s early days, and its workforce employs a higher percentage of women than the anime industry norm, including in typically male posts like animation director and character designer. Many of its works are centered on female characters. And whereas most Japanese studios hire animators on a per-frame freelance basis, leaving them underpaid and overworked, KyoAni pays its staff a regular weekly salary. Young recruits, many from the western island of Kyushu, are trained in the in-house KyoAni School.

Starting out as a service studio, KyoAni quickly made a name for itself with its consistently high-quality work. After moving into original projects, it created a run of hit series in the 2000s, such as K-On! and Lucky Star; its post-apocalyptic sci-fi series Violet Evergarden was recently picked up by Netflix. The company funneled profits back into its enlightened employment policies, creating a workplace culture that was much admired in the industry. For more information on KyoAni, check out SakugaBlog’s in-depth profile.

On top of the casualties, the fire also destroyed all the materials in the 1st Studio Building. Hatta told reporters, “The [monetary] amount of the damage? Extreme. I don’t know the full details.” It isn’t clear when — or indeed whether — the company will recover from the blaze, although a fundraiser launched in its wake has raised almost $2 million at the time of writing. Sentai Filmworks, the Texas-based anime licensing firm behind the campaign, writes, “We are coordinating with others in the Japanese anime industry within Japan to ensure that funds collected reach those in need.”

The incident has prompted an outpouring of support from people in the animation industry and beyond. Crunchyroll is inviting people to submit messages or images relating to KyoAni, which it says it will present to the company. Furious and heartbroken fans have taken to Twitter to pay tribute:

Trying to cope with this Kyoto Animation news. Here's a thread of some of my favorite animation cuts and moments they've ever done.

Instead of wallowing in sadness, which looms close, I will focus on gratitude.
Thank you, KyoAni, for everything you have ever created.
Thank you to the anime community for the outpouring of love.
Thank you, world, for recognizing the impact Kyoto Animation has had on anime.

Haruhi, K-ON!, Free!…I grew up watching Kyoto Animations.
KyoAni is gave a great experience on me. Game and Anime are the nearest industry. I can’t help myself feeling sad. 心よりご冥福をお祈りいたします。

Hearing about the arson incident at KyoAni breaks my heart.

This is a studio responsible for many life changing series that got many into the anime community through their direction & handcrafted personal details. I hope everyone involved recovers soon.#ThankYouKyoAni pic.twitter.com/RIgF8papCI

It's 4:30am right now but I need to be awake to say this:
KyoAni has created some of the most incredible works I have ever seen, anime or otherwise. I doubt I would be the same person I am without some of them. This is a huge loss however it turns out.#京アニ#KyotoAnimation pic.twitter.com/cbdPUk5hpU