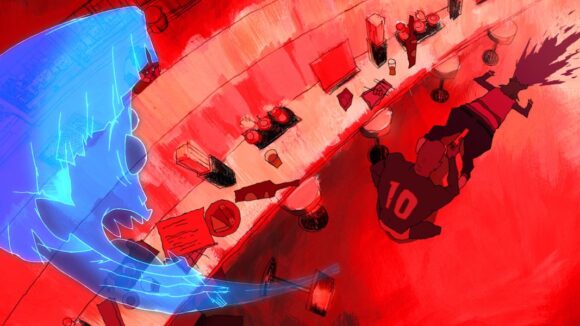 We caught up with Aaron Long for the latest entry in The Animation That Changed Me, a series in which leading filmmakers and artists discuss one work of animation that deeply influenced them. Long is a Canadian artist and filmmaker based in L.A., where he has directed on shows including Netflix’s Bojack Horseman, Netflix-and-now-Adult Swim’s Tuca & Bertie, and Comedy Central’s Triptank. Outside the industry, he works on his own projects, including the web series Sublo and Tangy Mustard and Fester Fish.

Long’s choice is Mind Game, the cult 2004 feature written and directed by Masaaki Yuasa and based on Robin Nishi’s manga of the same name. Over to Long:

I first saw Mind Game in 2011 after reading Ben Ettinger rave about it on his excellent blog Anipages. For some reason the film’s title was off-putting to me at first, but he seemed so excited about it that I finally decided I should track it down. It had no official North American release [at the time] and wasn’t easy to find online, but when I finally did, it blew me away on several levels. It’s an amazing visual achievement, combining 2d, 3d (both well-integrated and deliberately incongruous), live action, and more in a way that always feels spontaneous and playful. The visuals are so kinetic and bold that it’s easy to focus on them, but the storytelling is just as impressive. It’s deeply humanistic, presenting a world in which everyone has their own story, justifications for their actions, and a reason to look forward to the future.

The sprawling story seems to touch on almost every aspect of human life. I found it overwhelming and strangely addictive. I soon watched it a second time because I was confused on certain plot points (or so I thought — I’ve since found that Masaaki Yuasa is great at subtly communicating exactly what you need to know without being explicit). The closer I examined the film, the more there was to discover. It’s incredibly dense!

When I first saw Mind Game, I had a very “classical” view of what good animation was. Like a lot of aspiring animators at the time, I was reading John K.’s blog, which was about 50% objective cartooning lessons and 50% very subjective diatribes. I didn’t agree with everything he wrote, but it put a lot of ideas in my head about what you should or shouldn’t try to do with animation — broadly speaking, “1940s theatrical slapstick shorts are the pinnacle of the medium, and the best we can ever do is imitate them.”

I loved anime as well, but what I’d seen of it almost felt like a separate thing with different priorities. Mind Game jolted me out of all that! It broke so many “rules” of storytelling, animation, and genre that it felt like I was seeing the limitless potential of the medium for the first time. It was part “anime” but also part Tex Avery, part Beavis and Butt-Head, part Yellow Submarine — but most of all, its own unique thing that defied categorization. The idea of genre expectations became more and more offensive to me after seeing Mind Game.

It’s so hard to pick a favorite scene in a movie as wonderfully all-over-the-place as this one, but if I had to pick one, it might be the mid-film car chase with the yakuza. The scene conveys an absurd sense of speed using cg backgrounds, with a great blend of high-octane action and ridiculous physical comedy. It also makes use of the free-associative cutting seen throughout the movie.

Other contenders would be the climactic escape from the whale, where the animation and music combine to create such tension that I always find myself holding my breath while watching. The scene where Nishi meets a sadistic constantly-changing God, the psychedelic rhapsody dance, the disturbing standoff in the izakaya, the beautiful and funny sex scene … All of these could be broken off into stand-alone shorts, but the cumulative effect of the film is even better.

I’ve taken a lot of inspiration from the film in my independent projects. Probably the most obvious thing is the backgrounds, which use distorted wide-angle perspective, with photo elements loosely pasted into wiggly hand-drawn linework and washes of color. Seeing this made me realize you can have fun with perspective — it doesn’t have to just be tedious technical work. In some of my Sublo and Tangy Mustard episodes I consciously emulate Mind Game’s collage-y background style. I tell myself it’s okay because my show’s setting is so different, but it’s honestly a direct steal! I’m not the kind of viewer who likes to watch their favorite movies regularly and memorize them line by line. I try to avoid rewatching too often, so that they stay fresh and surprising for me. But even then I probably see Mind Game at least once a year, to study some element, to show it to somebody who’s never seen it, or just for fun.

On rewatches, the second half can feel slow. It’s a deliberate turn, but the wild energy of the first half is so amazing that I almost wish the movie continued further in that direction, with the characters being pursued by the yakuza. Instead the second half becomes simultaneously more meditative and more manic, with the characters coming to know themselves better through dream sequences, flashbacks, and other vignettes.

Anyway, I don’t really see it as an issue — the second half is where the themes come together, the characters are forced to grow, and it leads to that satisfying, visceral climax. Ultimately, I wouldn’t change anything about the movie.

My first takeaway from the film was simply “Masaaki Yuasa is a genius!” but over time I’ve come to recognize the other talents that helped shape it. The film is a perfect storm of wildly inventive raw source material by Robin Nishi; Yuasa, a first-time feature director overflowing with ideas; an all-star team of animators who contributed to the look of the film, like Yuichiro Sueyoshi and Shojiro Nishimi; an eclectic score by Seiichi Yamamoto; and more.

I met Yuasa very briefly in 2013 when he came to Anime Expo to debut his short Kick-Heart. He did a drawing for me, which I still proudly have on display in my apartment. He probably drew for at least fifty people that day, so I’m sure he wouldn’t remember, but it was a huge deal to me! I had just moved to L.A. and started working in the industry, so the idea of meeting anybody who had worked on a cartoon I liked was still new to me, let alone the director of my favorite film!

“Mind Game” is distributed by GKIDS in the U.S. and available for digital purchase and rental, as well as on Blu-ray and dvd.