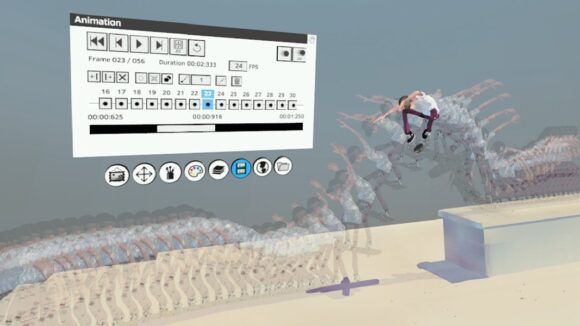 Facebook as a maker of animation tools? It happened today.

The company just announced a major upgrade to its virtual reality drawing tool, Quill, introducing animation capabilities into the software.

The 3d animation tools, which are designed for a vr-native workflow, include support for frame-by-frame redrawing, copy-and-re-pose animation, and an animation brush, among other features. The video below gives a sense of what can be achieved with the new toolset.

While it’s been possible to create animation with Quill – the Emmy-nominated Dear Angelica was made with it – animation had previously been a cumbersome process. These custom tools introduce a clear and efficient way of producing animation in Quill, while dramatically reducing production time. For example, while testing the tools, Facebook’s resident Oculus artist Goro Fujita created a new film, Beyond the Fence, in just three weeks, which would be considered fast even by the standards of traditional 3d animation software.

Facebook also notes that any visual layer in Quill can be turned into an animation layer, and each of those layers can run at a different frame rate. For example, “layer 1” can run at 8 frames per second, “layer 2” at 12 frames, and “layer 3” at 24 frames per second.

Facebook is actively working on other Quill updates and features. In today’s news release, it offered a hint at the endgame for its embrace of animation: co-immersive social vr. As its Oculus Rift headsets become more commonplace, Facebook wants people to watch and engage with animated Quill stories with friends through its Facebook Spaces platform. The company hopes that animators will use the tools to craft vr-native storytelling, and “to invent a new kind of narrative that’s not just compellingly watchable, but fully immersive and perfect to be shared together.”