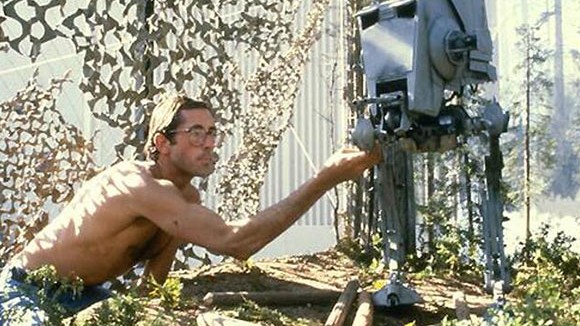 Weren’t able to catch real-time celebration of Industrial Light and Magic’s storied visual effects output at Comic-Con? Then catch up with the premiere of Raiders, Raptors and Rebels: Behind the Magic of ILM next weekend on the Science Channel.

Narrated by Luke Skywalker — I mean, Mark Hamill — and including interviews with ILM visionaries John Knoll and Dennis Muren, Raiders, Raptors and Rebels also features some people named Joss Whedon, Robert Downey Jr., James Spader, and George Lucas, the latter of whom we are told created the whole enterprise in 1975 with a million dollars and a dream of taking over the world. Indeed, its star power alone could recommend the documentary as a fitting 40th birthday bow-down for science and science-fiction scholars and fans, as well as students of animation seeking a VFX history lesson.

But as importantly, Raiders, Raptors and Rebels also tracks how ILM’s visions of the future in sci-fi franchises like Star Wars and Jurassic Park have in turn engineered real-world innovations we once considered fantasy. The bionic prosthetics of The Empire Strikes Back are specifically cited in the documentary, as is the foundational role that Jurassic Park’s innovations played in inspiring new generations of VFX talent, as well as paleontologists and geneticists seeking solutions to mass extinction.