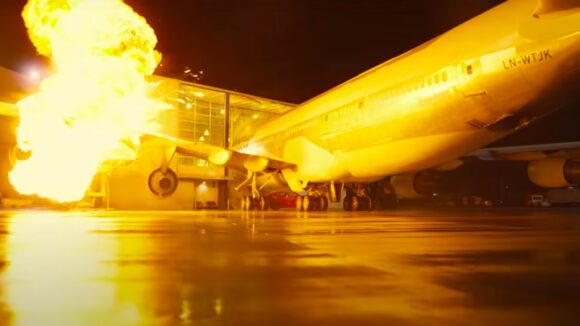 Christopher Nolan’s commitment to the theatrical experience isn’t his only proclivity for the old school. He’s also known for his love of practical special effects — a love that’s only growing with age.

Tenet, which is hitting theaters later this month (as Nolan intended), has a high ratio of special to visual effects, even by the director’s standards. “Our vfx shot count is probably lower than most romantic comedies,” he told International Cinematographers Guild (ICG) Magazine in a recent interview. The film’s editor Jennifer Lame estimates in the same article that Tenet has under 300 vfx shots; compare that to 500 in Nolan’s Inception and over 3,000 in Marvel’s Avengers: Age of Ultron.

Tenet’s low count is remarkable when you consider the film’s visual scale. Among the set pieces in the time-warping action epic are a car that flips over on the road and a Boeing 747 plane that blows up. These scenes were shot in camera. As an awed Robert Pattinson, who stars in the film, said to Total Film of the Boeing explosion, “I was thinking, ‘How many more times is this even going to be happening in a film at all?’”

What advantages does this approach hold over logistically simpler vfx? Nolan’s colleagues commented on this subject to ICG Magazine. The film’s special effects supervisor is Scott Fisher, a longtime Nolan collaborator with a reputation for working at the intersection of practical and visual effects. He said he and Nolan watched many World War II movies for reference, adding:

It isn’t that the cg planes in [2012 movie] Red Tails looked bad compared to these old movies, but rather what they had the planes doing that made things less convincing some of the time. When you’ve seen real-world objects in motion, your mind develops a default setting for how things behave, whether they are fish or aircraft.

We’ve gotten very good, in the pure vfx world, at matching to an existing reference. But if you don’t have a solid starting point, it is much harder to invent the randomness of reality that sells the credibility aspect. Taking advantage of those random events is a big part of my job, and a big part of retaining what you get in the plate is realizing that you can create too much detail. You shoot the car in reality, and there’s going to be a certain amount of atmosphere in the air obscuring the hubcaps, so you don’t need to render those with complete clarity. In fact, it will hurt your final if you do.

Elsewhere, Jackson expanded on his practices:

I like to shoot a lot of practical elements that can be used either as reference or as sweeteners … I never mind spending time shooting elements, even if they wind up being replaced by cgi, because the core of the shot remains practical, retaining the magic of the original.

Jackson, who trained as a model maker, also has a background in practical effects. In the interview, Nolan paid tribute to his colleague:

Jackson was responsible for coming up with our safety net. We wanted it all in-camera, but if it couldn’t be done, what choices are there in postproduction? I like to say Andrew kind of bid himself out of a job because he helped us achieve such an enormous amount practically … There were still very complicated visual effects for the team at [DNEG], but Andrew’s expertise and background in on-set effects benefitted us enormously.

Nolan’s fondness for practical craft in filmmaking extends to the sphere of indie animation, where he has ardently supported the careers of stop-motion wizards the Brothers Quay. He has shot a short documentary about them, curated a touring program of their shorts, and executive produced their most recent work The Doll’s Breath.

Tenet will hit theaters in many overseas territories on August 26, and is due to be rolled out in the U.S. (where theaters are open) from September 3.