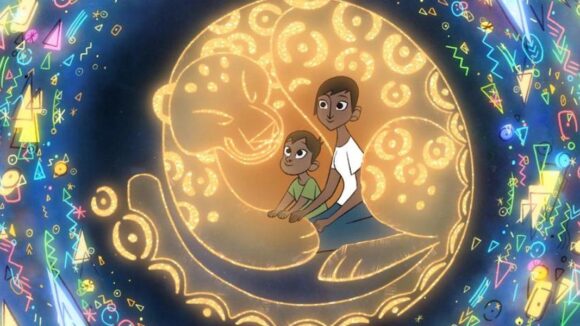 Wolfwalkers has found its companion piece. Cartoon Saloon, the Irish studio behind the forthcoming fantasy feature, has animated a spot for environmental NGO Greenpeace that addresses the impact of industrial meat production.

“There’s a Monster in My Kitchen” draws attention to deforestation in Brazil and across the world, slotting neatly into the studio’s canon of ecological works. The short film was produced with creative agency Mother and backed by Paul McCartney’s Meat Free Monday campaign. Watch it below:

In the spot, a young boy is about to tuck into some chicken when he is confronted by a jaguar, who proceeds to tell him about the damage meat farming is wreaking on his habitat. The film accompanies new research by Greenpeace which shows that around 87,500 square miles of territory in Brazil — an area roughly the size of Minnesota — had burned up this year by the end of September.

The subject matter echoes Wolfwalkers, which depicts another case of deforestation, but in a very different time and place: Ireland in the mid-17th century. The spot will be screened before the feature in theaters in some territories.

“There’s a Monster in My Kitchen” was directed by Tomm Moore, co-founder of Cartoon Saloon and director of Wolfwalkers, and Fabian Erlingäuser, animation director on the studio’s Song of the Sea and The Breadwinner. Moore and storyboard artist Iker Maidagan have been sharing development materials for the ad on Twitter:

by adding careful character posing in our layouts we could help the animators focus on performance and movement and guide the look of the characters from shot to shot … with such a great team i was abe to work quite rough which was a time saver too pic.twitter.com/BRXWJBzXPe

The little boy in the short is based on my little Peruvian nephew Salvador .. it was so nice to pose out his scenes with the real kid in mind 😉 https://t.co/Ma5Q5JOkFb pic.twitter.com/ORa41KYj3T

The midpoint with the landscape destruction and animal farming was more involved originally, with split screens coming from all directions, creating all these scary angular shapes. The idea was to overwhelm the viewer. But it got simplified for easier viewing on all platforms. pic.twitter.com/IQ4KfRbLDV