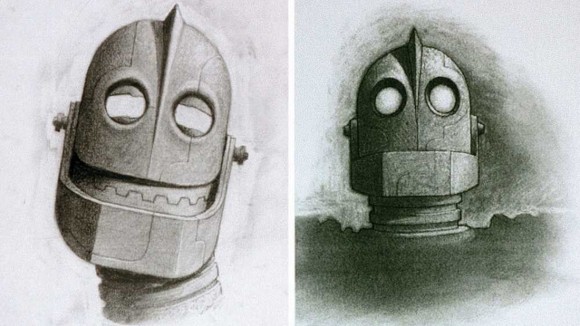 This is one of those it’s-almost-too-good-to-believe rewards for being a dedicated animation fan, but The Iron Giant is finally getting the lush art-of/making-of book treatment

seventeen years after its theatrical release.

Insight Editions has provided Cartoon Brew with an exclusive video below that offers a deeper look inside the book.

The Art of The Iron Giant, written by former Animation Magazine editor Ramin Zahed, will start shipping next week. The 144-page book promises “never-before-seen images, concept art, backgrounds, and storyboards,” as well as new interviews with Bird and other key members of the film’s creative team. The book will also include artwork from the newly restored scenes in the “signature edition” that debuted last year.

Needless to say, if you’re a fan of the film, this book and the just-released The Iron Giant Collector’s Edition Blu-ray