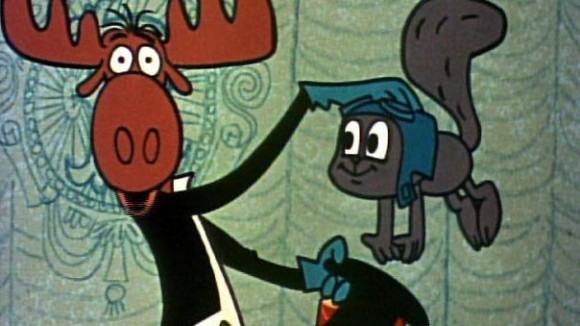 Animation legend Jay Ward produced such cartoons as Rocky & Bullwinkle, Mr. Peabody & Sherman and George of the Jungle. Besides having a fine sense of humor, it turns out that he was a lovely human being, too. Cartoon researcher ‘Don M. Yowp’ uncovered this story published in a 1962 edition of the Abilene Reporter-News: Linda Dill is a senior in Baird High School. She fell in love with the Bullwinkle nonsense when it came along, and since she has marked artistic talent, she made some tiny dolls to represent the characters, wrote a script for them and let them “perform” for various Baird classes. One day, she bundled up her Bullwinkle dolls and mailed them to Jay Ward. That started a friendship-by-mail. Jay wrote that the dolls were on exhibit in his Hollywood studio. He sent Linda a Bullwinkle clock and a battery-operated Bullwinkle figure. Linda, in turn, got up a “petition” in Baird seeking statehood for Moosylvania.

Then it developed that Jay Ward would be in Dallas for a show in mid-November and he wrote an invitation to Linda to drop by if she could. Linda would have but six-weeks exams conflicted and she had to decline the invitation. On Wednesday evening last week a long distance call came to Baird from Jay Ward at Dallas. He asked to speak to Linda. Then he learned. Linda is deaf, her mother told Jay…

Grab some Kleenex and read the rest of the story on the Tralfaz blog.