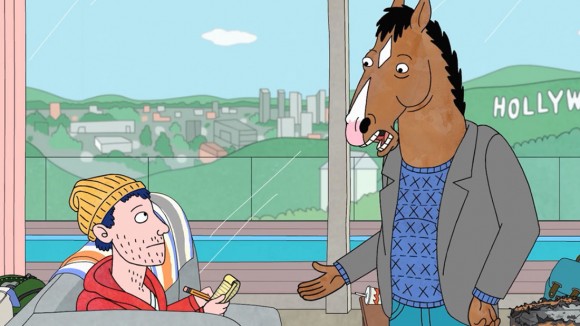 Artists working at Shadowmachine on the Netflix series BoJack Horseman recently received a letter from show producer, Eric Blyler, asking them to remove their artwork from the Internet.

Here’s the letter in full:

Now that the profile of our show is rising, we need to get a lot more protective about what we show online. I know a lot of character designers have been posting their work online since season 1. Sadly, we need to bring an end to that practice. If you have samples of your artwork for the show posted on Tumblr, Instagram or any other website, you’ll need to pull it down. Same goes for any storyboard samples, background and prop art, animatics and any other original art created for the show. We’re going to start looking for organized efforts to publish work for special events, at which time we’ll ask for submissions from any of you who want to participate to be approved before posting.

I know you’re all really proud of the work you’ve done for BoJack Horseman, as you should be. You’ve all contributed so much brilliance to the show and want you to have a chance to share it. We’ll be looking for opportunities to do this in the future.

If you have any questions about this don’t hesitate to email, call or come see me.

This is an uncommon request in today’s animation industry; the BoJack staffer who sent it to us called it “overreach” that “makes my head spin.” Few TV animation studios take issue with artists posting their work online after a show has been released, and in fact, the practice is encouraged by many studios.

While Shadowmachine may have some sort of copyright over the artwork, fair use generally protects artists who want to display work samples online as long as it’s done for non-commercial purposes and the rights holders are properly identified.

But while the law technically protects artists in this situation, Shadowmachine still has leverage to discipline and discharge artists who disobey their request, a staffer at the Animation Guild, I.A.T.S.E. Local 839, told Cartoon Brew. The company could even take ex-employees to court, though it would be difficult to claim damages if the artwork is only being used as a work sample, the Guild staffer explained.

Shadowmachine’s letter raises an important question that affects artists throughout the industry: Should artists be allowed to exhibit their artwork online after a show or film has premiered? The Internet has become a vital tool for the professional careers of industry artists, and attempts to deny artists the right to share their work online could potentially affect artist’s future job opportunities. As just one example of how important the Internet has becoming to the hiring process, Harvey Beaks creator C.H. Greenblatt recently told Cartoon Brew that he found most of his show’s crew through Tumblr and other online sites.

Shadowmachine owner Alexander Bulkley told Cartoon Brew that he completely understands the importance of the Internet in the hiring process because he uses it himself for that purpose. He emphasized that the intent of the letter isn’t to hurt their employees’ career opportunities. Rather, the studio wants to protect artists by not accidentally releasing anything “that could be damaging to the show…because we’re all on the same ship.”

Bulkley said that artists are free to use screengrabs from the already released Netflix episodes to promote their contributions to the series; however, the company is requesting that artists not post pre-production or production artwork like model sheets, storyboards, animatics, or background paintings without prior permission. Bulkley explained that those assets are technically unreleased and could unintentionally reveal something to audiences that wasn’t meant to be revealed.

This conversation might have been very different a decade ago when posting artwork from a show online, even after it had premiered, would have been considered a major breach of etiquette. But studios today have adapted to the Internet age, recognizing that many of their artists maintain social media presences and need to display their latest artwork to maintain an edge in the highly competitive animation industry. Many productions even operate crew blogs to share the kind of artwork that Shadowmachine is asking its crew not to post online; these shows include Clarence, Harvey Beaks, and Gravity Falls.

The situation on BoJack Horseman will hopefully find a satisfactory resolution, yet it won’t be the last time this issue crops up as studios continue to adjust to this new Internet age and learn how to balance their obligations to clients and networks while ensuring employees are happy and fulfilled.