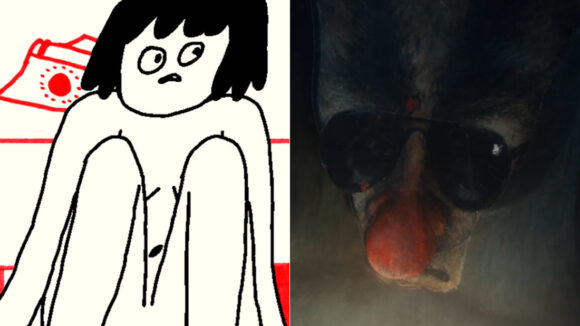 As the awards were presented last Saturday at Animafest Zagreb, a couple trends quickly became clear: women filmmakers and experimental cg films were dominating the evening.

A majority of the winners at the 27th edition of Animafest, the world’s second-oldest animation festival, fell into one of these two categories. Women took top honors in most of the categories, including Grand Prix for short film, best student film, best children’s film, best Croatian film, and audience award for short film. The only major category not won by a woman was the Grand Prix for feature film, in which all nine features in competition were directed by men.

We presented the festival’s Grand Prix for short film to Špela Čadež’s Nighthawk (Slovenia / Croatia), recognizing the “seemingly simple but surprisingly complex film” for how it “adds a new layer to a traditional animation technique of multiplane cut-out” and “uses parallel storytelling to switch between different perceptions to effectively create an extremely engaging tragedy of a man/animal.” Nighthawk isn’t online (see trailer below), but Čadež’s earlier film, Boles, premiered on the internet earlier this year.

The Grand Prix for feature film was awarded to Michael Dudok de Wit’s The Red Turtle (France/Belgium/Japan). The feature jury, consisting of Natalia Lukinykh, Ben Mitchell, and Simon Bogojević Narath, cited the film as “a celebration of both the unforgiving brutality of nature, as well as its life-affirming beauty that lingers with the audience for long after.”

In the student film competition, the Dušan Vukotić Award for the best student film went to Renata Gąsiorowska’s fun and meaningful Pussy, made at the National Film School in Lodz, Poland. The jury, comprised of Alberto Vázquez, Jana Jakoubek, and Sandra Malenica, gave this statement on the film:

Feminism has gone one level up. Actually feminism in this film is at its right point – totally open, free, spontaneous, above all and in front of us in the most literal way. Talking about sexuality is still taboo, especially women’s sexuality. That’s why this film is fresh, fun, sensitive, and real. It is also fluent in storyline, simple in drawing, great in sound and animation. It is reminder that female ‘body parts’ also have the life of their own. At least in films.

The same jury awarded the best Croatian film to Chintis Lundgren’s Manivald (Estonia/Croatia/Canada), another unique piece of cartooning that uses a quirky sense of humor to explore an unhealthy mother-son relationship.

On the cg front, the machinima film Martin Cries (France) by Jonathan Vinel won the Golden Zagreb Award for creativity and innovative artistic achievement. The short film jury said of the 16-minute film:

The violent fantasy of videogame culture finds new meaning — and beauty — in this wistful tale of a teenager who is ghosted by his best friends. Vinel takes the dissonant qualities of videogames and cinema, and integrates them in a wholly unique and organic manner. His mastery of digital filmmaking tools is more important than the tired debate of: “Is machinima animation?” To us, creativity and innovation means the ability to transcend simplistic labels and categories, and embracing whatever tools necessary to uncover new perspectives and meaning through animation.

Each of the five short film jury members were given the opportunity to present one special mention award, and three of the five jury chose cg shorts: Rosto selected Orogenesis by the French director Boris Labbé, Nobuaki Doi selected Nikita Diakur’s Ugly (Germany), and I personally selected Jonathan Ostrem’s Change (Canada). These films, together with Martin Cries, represent promising new directions in cg filmmaking that veer away from the prevailing trend of photorealism and explore creative expression through the use of satellite imagery and 3D models, simulations, and real-time rendering techniques.

Special mention by Amid Amidi
Change by Jonathan Ostrem (Canada)

Special mention
The Girl Without Hands by Sébastien Laudenbach (France)

Winner
The Drive to Work by Paul Fletcher (Australia)

Special mention
Odd is an Egg by Kristin Ulseth (Norway)