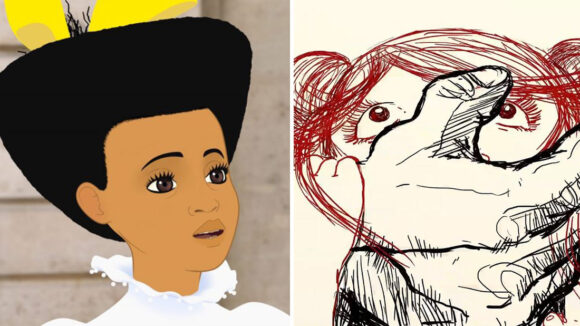 Ocelot (Kirikou and the Sorceress, Azur & Asmar: The Princes’ Quest) has been nominated for France’s highest film honor a total of five times, and previously won in the Best Animated Short field for The Legend of the Poor Hunchback in 1983.

Dilili in Paris tells the story of an indigenous Kanak girl from New Caledonia, who’s just arrived in Paris during the Belle Époque era. Upon her arrival the young heroine gets caught up in the strange disappearances of women across the city and decides to investigate. Samuel Goldwyn Films recently picked up U.S. rights to the film and will release it theatrically later this year.

The other animated feature nominees were Pachamama, directed by Juan Antin, and the French box office smash Asterix: The Secret of the Magic Potion, directed by Alexandre Astier and Louis Clichy. It’s worth noting that Antin’s Pachamama will debut on Netflix in June.

The winner in the Animated Short category was Wicked Girl by Turkish director Ayce Kartal, which had previously picked up awards at Annecy, Ottawa, and Clermont-Ferrand, among other festivals. The hand-drawn film centers on the thoughts of an eight-year-old Turkish girl who has been the victim of sexual violence.

The other nominees in the category were Alice Eça Guimarães and Mónica Santos’ Between the Shadows, Denis Walgenwtiz and Winshluss’ The Death, Dad & Son, and Sarah Van Den Boom’s Raymonde or the Vertical Escape.

You can watch Wicked Girl in full below :