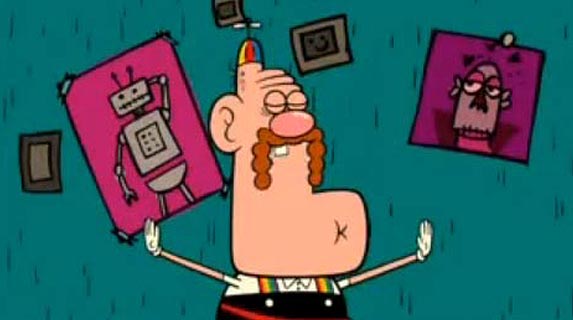 Having scored its most-watched summer in its 20-year history across early primetime, Cartoon Network has greenlit two animated series conceived as part of the shorts development initiative underway at Cartoon Network Studios in Burbank, CA. Steven Universe, from Adventure Time writer and storyboard artist Rebecca Sugar, and Uncle Grandpa, from Emmy® Award-nominee Pete Browngardt, have started pre-production and are currently slated for a 2013 debut. Building upon the global success of recent artist-driven series like Adventure Time and Regular Show, both new series will further define the genre of homegrown animated comedies coming from Cartoon Network Studios.

Sugar’s Steven Universe is a coming-of-age story told from the perspective of Steven, the youngest member of a team of magical Guardians of the Universe. Browngardt’s Uncle Grandpa is based upon the Emmy®-nominated short of the same name and follows the exploits of Uncle Grandpa—everyone in the world’s “magical’ uncle and grandpa.

Rebecca Sugar became a storyboard artist and writer on Adventure Time in 2009 after graduating from the School of Visual Arts (SVA). The first episode she boarded, “It Came From the Nightosphere,” was nominated for an Emmy® and included the first song she wrote for the series, “Daddy, Why did you eat my fries?” which quickly became a fan favorite. Since then, she’s written 17 songs for the show and has boarded on some of Adventure Times’ most acclaimed episodes: “The Real You,” “Jake vs. Me-Mow,” “Fionna and Cake,” “What was Missing,” and “Incendium.” Sugar was nominated for an Annie Award (ASIFA) for her storyboards on the Adventure Time Season 2 finale “Mortal Folly.”

Pete Browngardt’s interest in animation developed early. The youngest of five children, Browngardt was making animated Super 8 and stop-motion films while still in grade school on New York’s Long Island. After studying character animation at CalArts, Browngardt started working professionally for Futurama at age 19, followed by stints with Industrial Light and Magic, Augenblick Studios and MTV Animation. Since then Browngardt has worked on a number of Cartoon Network series including Chowder, The Marvelous Misadventures of Flapjack and Adventure Time. Most recently Browngardt was the Creator/Executive Producer of the Cartoon Network animated series Secret Mountain Fort Awesome which won the Annie Award for Best Production Design in a television production, the “Cristal” for Best TV production at the Annecy International Animated Film Festival and two juried Emmy® awards in 2012.