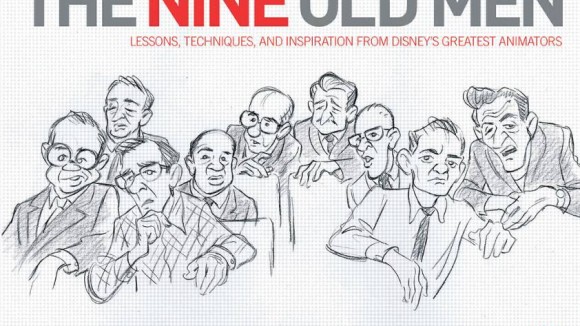 Focal press has released cover art for what is sure to be one of next year’s most popular animation titles: Andreas Deja’s The Nine Old Men: Lessons, Techniques, and Inspiration from Disney’s Greatest Animators.

Disney’s Nine Old Men are no mystery thanks to Frank Thomas and Ollie Johnston’s illuminating The Illusion of Life and John Canemaker’s excellent biography Walt Disney’s Nine Old Men and the Art of Animation, but Deja brings a unique perspective as one of the most revered animation figures of Disney’s Eighties and Nineties revival. Not only was Andreas inspired by these earlier animators, he applied their lessons and techniques to create a new generation of Disney characters including Gaston (Beauty and the Beast), Jafar (Aladdin), Scar (The Lion King), the titular star of Hercules, and Lilo in Lilo & Stitch. Deja, who often discusses classic Disney animation on his blog, also had personal friendships with a number of the Nine Old Men. It should make for a very unique book:

Here is Focal’s description of the project:

Learn from the men who changed animation forever. Walt Disney’s team of core animators, who he affectionately called his “Nine Old Men,” were known for creating Disney’s most famous works, as well as refining the 12 basic principles of animation.

Follow master animator and Disney legend Andreas Deja (Beauty and the Beast, Aladdin, The Lion King) as he takes you through the minds and works of these legendary animators. An apprentice to the Nine Old Men himself, Deja demonstrates the techniques and fundamentals that these men perfected through famous works such as Sleeping Beauty, Cinderella, 101 Dalmatians, and much more. Special attention is given to each animator, accompanied by Deja’s thoughtful analysis on their techniques with special consideration given to figure drawing, acting, story structure and analysis, and execution. The in-depth analysis of each animator’s work will allow you refine your approach to character animation and make better creative choices. Rare sequential drawings by the Nine Old Men are also featured, giving you unprecedented access and insight into the creative processes of these legendary animators. A gallery of Deja’s own work and instruction is included, allowing you to learn techniques from a contemporary master of animation.

The approximately 300-page book, scheduled for release on February 25, 2015, will retail for $40. It is currently available for pre-order on Amazon for $38.