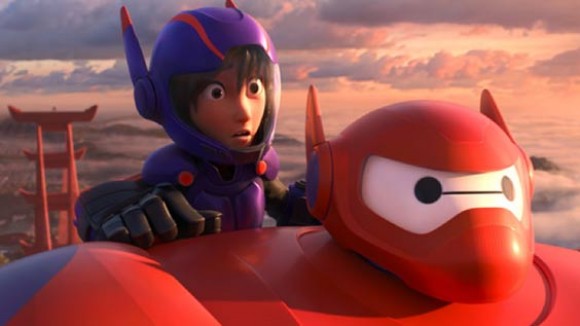 Disney’s Big Hero 6, directed by Don Hall and Chris Williams, topped the United States box office with a first weekend gross of $56.2 million. Christopher Nolan’s Interstellar had been expected to challenge Big Hero 6 for the top seat, but Nolan’s latest proved to be no match for Baymax and company, grossing $47.5 million in second place.

The Big Hero 6 opening falls short of the studio’s last film, the mega-hit Frozen, which opened with $67.4M, but tops the launches of the two Disney film’s prior to that: Wreck-It Ralph ($49M) and Tangled ($48.8M). Not only is Big Hero 6 the second-strongest animated film opening of the year, behind the $69 million launch of The LEGO Movie, but it’s also an impressive figure when one considers that this is the first time the Disney Animation studio has ventured into pure-superhero territory.

Big Hero 6 scored $7.6 million from international territories. Like many Disney films, it has a staggered rollout that won’t result in huge international weekend grosses, but will ensure consistent box office returns through next spring. The film’s biggest overseas territory at the moment is Russia where it’s earned $18.2 million.

Laika’s The Boxtrolls hit the $100 million mark over the weekend, with $49.1 million from the United States. The film will come close to matching ParaNorman’s global gross ($107.1M) but will fall well short of the company’s first outing, Coraline ($124.6M).

Reel FX’s The Book of Life spent its last weekend in the U.S. top ten, landing in the tenth spot with $2.8 million. The film has grossed $45.2 million in the States and $34.5 million overseas for a grand total of $79.7 million.

The GKIDS release of Studio Ghibli’s The Tale of The Princess Kaguya picked up an additional $51,082 for a $333,017 U.S. gross. By next weekend, it will become the third-highest grossing GKIDS release, behind From Up on Poppy Hill ($1M) and The Secret of Kells ($677K).