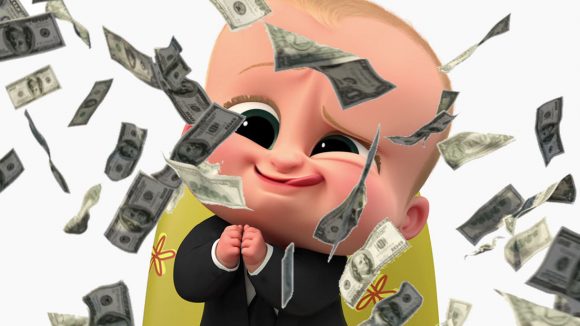 The Boss Baby, the 34th(!) feature film released under the Dreamworks Animation banner, took No. 1 at the U.S. box office in its debut weekend, pulling in a much-higher-than-predicted $50.2 million.

Box office pundits had unanimously pegged Disney’s live-action remake of Beauty and the Beastto win first place, with Boss Baby predictions ranging from $30-35 million. Like last year’s obviously low Sausage Party predictions, it’s a case of film industry observers once again underestimating the powerful appeal that animated films can have with the masses.

Directed by Dreamworks veteran Tom McGrath, Boss Baby faced an uphill battle with more than half of film reviewers giving the film a thumbs down. Audiences who saw the film ended up disagreeing with the critics; the film earned an A- Cinemascore rating from filmgoers.

The $49M opening is the biggest opening for Dreamworks since Home, which opened in March 2015 with $52 million. That film, too, received similarly poor reviews from critics, but nevetheless came out on top.

Boss Baby has grossed $60.9M from international dates, pushing its worldwide total to $111.1M. That includes a $6.5M launch in Mexico, which is the biggest-ever for Dreamworks Animation, and over $21M in Russia over two weeks, placing it among the country’s top 10 animated releases of all time.

Rupert Sanders’ Ghost in the Shell, based on Masamune Shirow’s manga Ghost in the Shell, opened with $18.7M in the U.S., good for third place, but a disappointing launch for Paramount, which spent $110M on the production. The lack of enthusiasm for the film isn’t surprising considering the year-long backlash to the casting of Scarlett Johansson, a role that many fans felt would have been more suited to an Asian actor.

Also, Sony Pictures Animation’s Smurfs: The Lost Village opened in nearly three dozen territories ahead of its U.S. release next Friday. The film picked up $15.1M from these foreign plays.