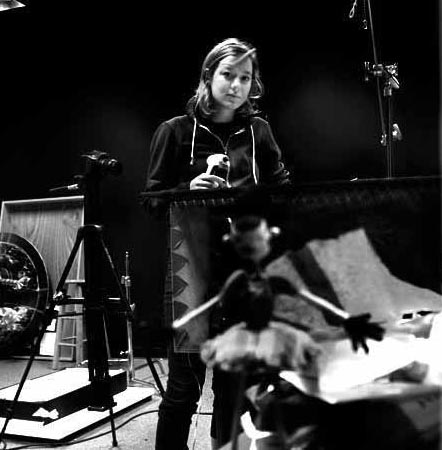 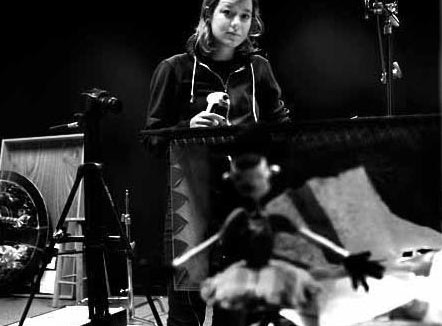 Today, as part of Cartoon Brew’s Student Animation Festival, we’re delighted to present Money Bunny Blues by Ellen Coons of Detroit’s College for Creative Studies. As stop motion animation in feature films becomes slicker and increasingly indiscernible from CGI, it’s refreshing to find a stop motion short that embraces the technique’s quirky and whimsical possibilities. The film’s setting is an intricate handmade universe comprised of common household objects–candy, coins, fruit, playing cards. Within this fantasy backdrop and accompanied by a folksy, unadorned song of economic woe, loose-limbed Dolly attempts to connect with the elusive Money Bunny. Whether you’re in need of a few bucks or have more money than you know what to do with, the free-spirited charm of Money Bunny Blues will put a smile on your face.

Continue reading for comments from the filmmaker Ellen Coons:

THE IDEA
Money Bunny Blues was built around a song I wrote last summer in the midst of unpaid work. It was written out of the frustration of dependency. The Money Bunny character sort of grew from the concept of Money Karma, believing that what you give will eventually make its way back around. I won a cash raffle with a dollar that I found in a parking lot that summerâ€¦ it might’ve been what started this whole thing. Money Bunny was a sick infusion of childhood’s Easter Bunny with my semi-grown-up financial priorities.

TOOLBOX
The film is all stop motion animation, shot with Dragon Stop Motion on a Canon Rebel XS and composited in Adobe After Effects. Money Bunny has a steel ball and socket armature, and Dolly is made from wire–I like to think that this allowed for more contrast of movement between the characters. The sets were made mostly from cardboard and things that were lying around in disuse. I like to use what is available to me before I go gather new materials.

CHALLENGES/LESSONS LEARNED
My biggest challenge was probably working on the story. It’s difficult to build one from scratch, and I’ve always struggled with endings. I wanted to work through a sort of cat-and-mouse storyline, with a lot of opportunity for animating action. Making it into something with a real climax and ending was a struggle, and I’ve learned to spend more time on these things before starting production. It’s always the tendency to want to jump in and start making things, but when you don’t finish the story first, it’ll get crammed in later, without the love and care it deserves.

INSPIRATIONS
During production, I was very interested in experimenting with materials. I think that stop motion is unique in allowing objects from everyday life to be incorporated into fantastical and completely unreal environments. It was great to make a rainbow out of candy, because I love rainbows, and I love candy, and together they make dreams come true! I tried incorporating things I’d found whenever it seemed right, and finding ways to sneak them in when I could was fun and gratifying. Other inspirations include Billie Holiday, George Pal, A Town Called Panic, bunnies, Screen Novelties, friends and family, competitive instinct, success and failure, and lots of other things I’m sure.

The Cartoon Brew Student Animation Festival is made possible by the generosity of our presenting sponsor JibJab.