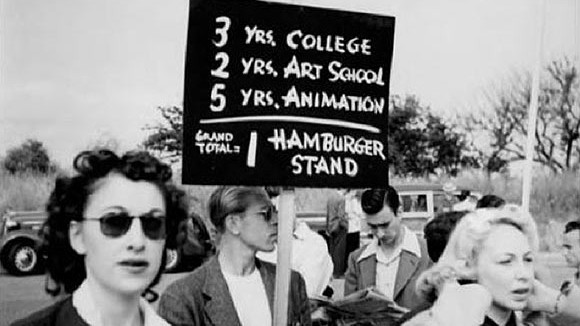 Good news, animators! After a relatively smooth labor negotiations, the IATSE Animation Guild Local 839 and Alliance of Motion Picture and Television Producers have drawn up a tentative agreement on a new contract.

The new three-year collective bargaining agreement runs from August 1, 2015 to July 31, 2018, and includes a 3% compounded annual increase to contract wage minimums, zero rollbacks or premium increases on health benefits, and a 10 percent increase in pension benefits for employees retiring after August 1, 2015.

Following the contours of the 2015 IATSE Hollywood Basic Agreement, the pact also includes unchanged health benefits with no increases to premiums for dependents, as well as increased health and pension contributions for freelance storyboard artists and timing directors, according to an Animation Guild press release.

So how smooth were the labor negotiations? They began on Monday this week and finished Wednesday.

“Contract talks are always somewhat contentious, but this year the attitudes on both sides were businesslike and cordial,” said Animation Guild business representative Steve Hulett, who led talks for the negotiation committee comprising Animation Guild president Jack Thomas, organizer Steve Kaplan, and IATSE VP Michael F. Miller. “There were a lot of proposals on the table, but we were still able to reach agreement in three days.”

The next step is for the parties to draft a Memorandum of Agreement, which will be submitted for ratification to the Animation Guild membership, which presently numbers over 3,100 animation directors, writers, directors, artists, and designers. All the animation majors are signatories to the contract, including Cartoon Network, Nickelodeon, Universal, Disney, Marvel, DreamWorks, Paramount, and Fox.

If ratification proceeds as planned, it takes effect on August 1. Break out the (affordable) champagne!