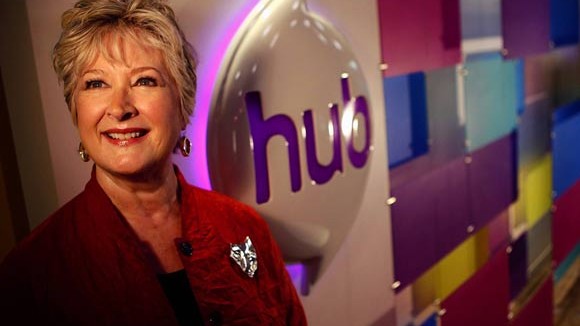 Margaret Loesch, a forty-year children’s TV veteran, has announced that she will step down as the founding president and CEO of the Hub Network when her contract expires at the end of this year. The five-year-old channel, which is co-owned by toy manufacturer Hasbro and Discovery Communications, has struggled to compete with cable stalwarts like Disney, Nickelodeon and Cartoon Network, although several of its shows have performed reasonably well, including My Little Pony Friendship Is Magic and Transformers Prime Beast Hunters.

After losing between $6-7 million per year, the network has achieved profitability, according to Hasbro. “The network is now in excellent financial shape,” says Loesch. “Its ratings are up year-to-year, our programming has won more than 30 awards, including 12 Daytime Emmys, and the Hub Network has become a TV home for quality programming that kids and their families come together to enjoy.” Despite these claims, hardly anyone is looking at the Hub. The network averaged less than 150,000 daily viewers last month. During a random week in May, not a single one of its shows besides My Little Pony managed to achieve greater than a 0.1 U.S. household rating.

Loesch’s departure has sparked speculation about what will happen to the Hub; industry observers suspect that the network will significantly revamp its programming lineup, and the channel could move its headquarters from Burbank to Silver Spring, Maryland, where its parent company Discovery is based. No replacement has been named, but Deadline reported that Tom Cosgrove, who runs Discovery’s 3D Television Network, is a top candidate for the job.