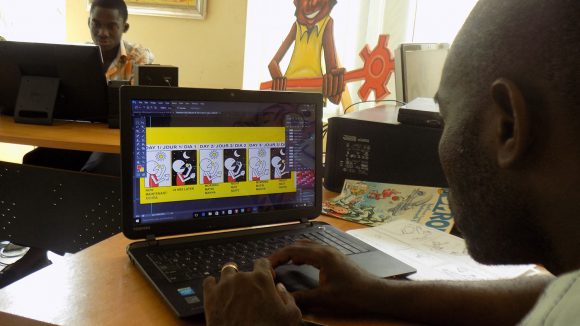 For almost two years Cycil Jones Abban, now 37, managed a pharmacy and spent his nights animating. Like the cartoonist Batman of Ghana’s capital, Accra, Abban started by working from his home, and eventually, he became the head of his own studio, Parables Animation Studios (pictured at top).

The movies and shorts that Parables creates breathe life into classic Ghanaian folklore and history by putting modern twists on tales that Abban grew up with. The studio churns out colorful and vibrant 2D cartoons that are inspired by American TV animation, some of which have been viewed 60,000 times on Youtube.

As of today, Parables has created an animated short titled Anansi Must Die, a 45-minute film titled 28th The Crossroads, and Storytime in Akwaaba, a television series that aired on a government channel for one season. These productions have garnered national attention and have served as a way to preserve local culture in the face of mainstream American shows, like Spongebob Squarepants and Fairly Oddparents, which have become popular in Ghana.

“Children learn from cartoons so it’s an excellent way to incorporate culture,” said Abban as he sat in a sparsely furnished office surrounded by wooden cutouts of characters from his animated series. “We translate our shows into the local languages so that everyone can enjoy them; this ensures that our culture isn’t overshadowed by foreign productions.”

The money he earned from his pharmacy largely funded Abban’s initial short film. Now, Parables has become self sufficient by taking on advertising jobs that have made further creative ventures possible and have exposed a larger, more mature audience to animation as a medium of communication.

Abban’s parents pressured him into going to college for medicine, although his passion has always been animation. His parents’ reluctance to allow him to study what he loved came from the stigma that cartoons are a childish form of media and that there is no possibility to earn a living in the industry. After finishing a few commercial jobs for the government, Abban noticed that the Ghanaian public was shifting its views toward animation.

“The real-life media landscape has become a little monotonous and boring,” he said as he put the finishing touches on a new storyboard on his laptop. “Animation gives you the ability to exaggerate points and make people fall in love with characters and concepts. People are beginning to see that this is an art medium and an industry that can grow to compete with other styles of media and communication.”

The Ghanaian government has provided would-be animators with a few schools where they can pursue the craft as a career. The National Film and Television Institute (NAFTI), Ghana’s premier media arts university, offers a four-year animation degree.

Founded in 1978, the university has historically struggled to receive funding and has seen little to no infrastructure development since its establishment. Students are only taught broad principles and theories, leaving the task of learning how to use software up to the individual. “Once they’ve completed the first two years, students will have a background in animating, directing, editing, photography, and sound engineering,” said Anthony Mensah, 39, NAFTI’s head of design. “That’s how they survive out there, we give them the skills to be as marketable as possible in the media industry.”

Although NAFTI tries to impart a wide skillset, it is notorious for providing minimal resources to students. It does not have an in-house computer lab with industry-standard software to aid students who do not have the financial means to purchase additional equipment or software.

“The quality of your work depends on the depth of your pockets,” said Najilau Dramundu, 22, a rising senior in NAFTI’s animation program.

Earlier this summer, Dramundu lived and breathed Adobe Animate, an animation program she used to complete her junior year project, a five-minute clip of an American ballad. Coupled with Ramadan fasting, the last few weeks of her third year were anything but pleasant. However, Dramundu is enamored by the creative and technical skills that animation melds together and the freedom the medium gives her to express her ideas. The hard work isn’t discouraging her.

“I’m obsessed with the idea of being able to manipulate events in your own way,” she said as she settled into a rickety chair in NAFTI’s outdoor cafeteria. “Animation is fascinating…it’s like you’re God, you can create whatever you want whenever you want.”

Dramundu wants to do more than preserve Ghanaian culture with her work. She hopes to address body image issues that are being exasperated by social media and are affecting the younger generation in her hometown, Tamale, in the northern part of the country.

NAFTI has produced socially conscious artists that are known to push the envelope. The most obvious example is Francis Yushau Brown, who declined to disclose his age, one of Ghana’s most decorated animators. With his unique blend of 2D and 3D animation, he has had his work shown at the Klik! Amsterdam Animation Festival, and has snagged honors from both the Ghana Movie Awards and Africa International Film Festival.

Brown, the CEO of AnimaxFYB Studios, an Accra-based animation studio, began working for a graphic design company straight out of high school and proceeded to attend NAFTI.

During his time at the university, he produced three short films that garnered both local and international acclaim. During his fourth year, he produced Agorkoli, which detailed the migration of the Ewe people away from a tyrant king in the eastern region of Ghana. His works have tackled various other social and political issues and have completely altered the way his audience perceives animation.

Although he produced his most notable pieces while attending NAFTI, Brown has since grown critical of the school. “There is a lot of bureaucracy that is killing the spirit,” he said.

VIDEO ABOVE: A recent piece produced by AnimaxFYB that encouraged a peaceful transfer of power in the recent Ghana presidential election.

He sees a future where individuals are the ones driving animation forward in Ghana instead of relying on government institutions. Brown has started developing an internship program for AnimaxFYB Studios that would allow hopefuls to apply through the studio’s social media platforms.

“I have a strong feeling that social network groups will be the ones to really drive modern film schools in Africa,” Brown said. “People who didn’t have the opportunity to attend school in this industry are now able to learn something free online. I see social media groups as really being the ones to step it up.”

Deboh Adeaga, 38, has created one of the groups that Brown believes could be the future. Adeaga, known as Sen, is the founder of Animation West Africa Network, a Facebook group that serves as a forum for anyone involved in animation or computer graphics in the region. Since its inception, the group has amassed over 3,000 members and is steadily growing. Anyone that is part of the community can post a screenshot of their progress on a 3D-model or an animation clip to get feedback on their work.

Adeaga, who is originally from Nigeria, received a degree in accounting in 1998 and following a year of compulsory national service, traveled to South Africa to intern at Triggerfish Studios, which has since evolved into an African cg powerhouse. While at Triggerfish, Adeaga was able to take part in the production of two major 3D-animated features. In 2010, after working with Triggerfish for a few years he decided to pursue a Master’s degree in information management and help expand the industry he loved in West Africa.

“What led me into this was realizing that I had exposure that most of the people out there don’t have,” said Adeaga, over a Skype call. “They might have all the skills, but no exposure and that is really what matters, to be able to become a team player and practically use the skills you need to succeed in the field. So I thought why not create something that will help us come together and see what we can achieve?”

Animation West Africa has fostered a healthy forum community, however, the group’s collaborative efforts to finish a project have been bedeviled by a plethora of issues, mostly stemming from a lack of funds. A crowdfunding campaign was created for Animation West Africa in October of 2015, but it has only received a few hundred pounds.

VIDEO ABOVE: A showreel of recent animation work by members of Animation West Africa includes work by animators in both Ghana and Nigeria .

Adeaga wrote the script to a short film tentatively titled, Road End. The unfinished project would depict a boy torn between getting home on time or helping a stranger in need. Adeaga received an influx of positive responses from the group at the start, but commitment and organizational problems arose almost immediately. Animators on Animation West Africa seem to lose interest quickly when there is no money to be made.

Adeaga hopes that Road End will be completed soon. He believes that once Animation West Africa clears its first hurdle as a team, future projects will become easier. “Everything I’m doing is out of love for the field and to support a local industry to the point where enough attention is focused on us that we will be able to stand on our own,” said Adeaga. “Combining all of the angles of the community is a lot of effort on my part, because I also need to sustain myself and my family, but I’ll keep doing what I have to do.”

Passion Will Win The Day

The West African animation industry is still in its development stages. Institutions and individuals are grappling with the challenges that come with treading in uncharted waters. While this confusion might act as a deterrent to some, those who have embraced animation plan to leave their mark on the art form.

“I don’t have any reservations about going into the industry,” said Dramundu as she adjusted her teal headscarf. “It’s the same thing in school, other people don’t study like I study. They don’t draw like I draw. They don’t tell stories like I tell stories. Everyone has their own techniques. So there is definitely a place out there for me.”