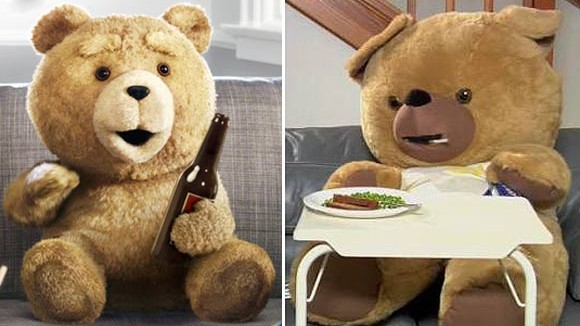 Seth MacFarlane has been accused of ripping off the vulgar-teddy-bear concept for his hit 2012 film Ted from a California company called Bengal Mangle Productions.

In a complaint filed this week in the U.S. District Court in Los Angeles, Bengal Mangle Productions claimed that Ted was “strikingly similar” to their creation Charlie, a bear who lives in the human world and has a penchant for drinking, smoking, and soliciting prostitutes. The character was created in 2008 for the screenplay Acting School Academy, and subsequently appeared in the webseries Charlie the Abusive Teddy Bear, which was posted on YouTube, FunnyorDie, and Blip.TV. The videos in the webseries had approximately sixty thousand views between February 2009 and June 2012, which amounted to less ten thousand views per episode. Here’s an episode from 2010 entitled Charlie Kills A Hooker:

The suit, which also names Universal Pictures and other production companies associated with Ted as defendants, claims that, “Charlie and Ted each have a substantially similar persona, verbal tone, verbal delivery, dialogue, and attitude.” To bolster that argument, the plaintiffs also presented a series of tweets from Charlie the Abusive Bear’s Twitter account and Ted’s Twitter account to show how the two bears “think” alike. Here are their examples of “similar postings”:

Charlie: I like Fox News. THey’ve made s**t talking an art form
Ted: I like Game of Thrones for tits and blood and Fox News for laughs

Charlie: I’m a bear and my nose is at crotch level. What do women expect?
Ted: I don’t mind giving the ladies oral pleasure. I just Febreeze the shit out of my snout after.

Charlie: That Charmin bear is on E in those commercials. “Oh rub the cloth on my face, it feels so good!”
Ted: Snuggles is bi. Found that out the soft way.

Back in 2012, we wrote about the similarities between Ted and Lucas Turnbloom’s comic Imagine This. In the comments of that post, readers pointed out that Ted also resembled the animated short Teddy Huggsbeary, the TV series Unhappily Ever After, a live-action short called Josh and Todd: The Story of a Man and His Puppet, and an online comic strip called Rehabilitating Mr. Wiggles.

Below you can read the entire copyright infringement complaint against MacFarlane: