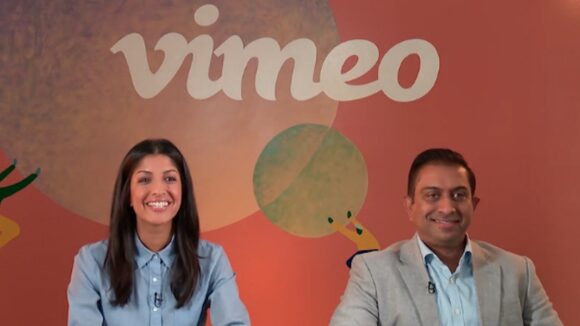 Video tools company Vimeo posted revenue of $96 million in its first earnings report as a public company, meeting Wall Street forecasts. The figure marked an increase of 43% on a year ago.

However, Vimeo posted a quarterly net loss of $20.4 million, or 13 cents a share, exceeding Wall Street projections of a five cent loss. There are signs that growth is slowing: the company disclosed that July revenue was up 35%, compared to 41% in June, 42% in May, and 46% in April.

Shares have dropped nearly 15% on Friday to $38.53. The company’s market capitalization is $6.3 billion.

Until recently, Vimeo was owned by IAC, a holding company with many media assets. It was spun off in May. Going public caps a period of great change at Vimeo, which has transformed its business since Anjali Sud (pictured at top, left) became CEO in 2017.

What was once chiefly a video sharing site now focuses on video tools for production and distribution. Their clients aren’t filmmakers so much as businesses, ranging from solo entrepreneurs to titans like Amazon.

This marks a drastic reinvention for a website once perceived as an indie Youtube. For years, Vimeo was seen as a natural home for filmmakers and artists, its curated Staff Picks all but guaranteeing wide exposure in the independent community. It gathered revenue through an on-demand service and seemed to be gearing up for a major push into the SVOD market, original content and all.

That all changed when Sud took over as CEO. “[W]e are not focused on eyeballs and content on Vimeo,” she told The Verge last April. “We actually don’t want Vimeo to be an entertainment destination where people come.”

Sud spearheaded the pivot from media to tech. “We probably weren’t going to compete well with Netflix in original content because we probably weren’t going to have $17 billion to spend on it,” she said of the change in company direction. On the other hand, she spotted a chance to enter a less competitive space: helping companies create, edit, disseminate, and sometimes monetize professional-standard videos, from ads to staff training videos.

One result: Vimeo’s importance as a place for filmmakers to upload their work has diminished relative to, say, Youtube’s. But Vimeo’s pivot has resulted in growth, spurred by increased demand for its services in the pandemic. The company has over 1.6 million paying customers, with subscriptions ranging from $7/month for a basic package to more than $20,000 for major corporations.

In the earnings release, Sud commented:

The evolution of video as the new way to work continues. In the second quarter we gained momentum in the enterprise with expanded product breadth, as we enhanced our all-in-one software solution to enable every employee to be a content creator and every business to be video-first. Our execution is on track and we are investing strategically to position Vimeo as a long-term winner in this large and early market.