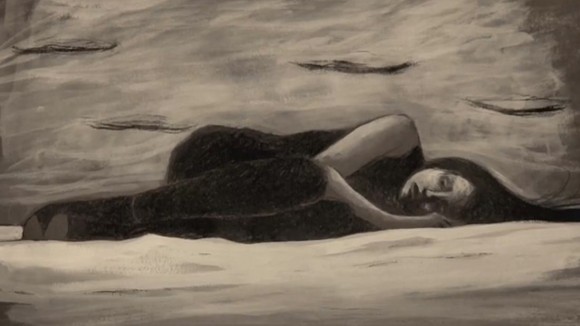 There’s only a few weeks left to apply for Denmark’s AniDox:Lab, which trains animation and live-action directors in developing animated documentaries. The videos throughout this post are examples of teasers developed during the Lab.

Earlier this year at Belgium’s Anima festival, Cartoon Brew sat down with Uri Kranot, AniDox:Lab’s main tutor and content supervisor, to talk about the program and how documentary animation can be so much more than recreating the unfilmed. Next to heading AniDox:Lab, Kranot is well-known for the politically and socially engaged animated shorts that he co-directs with Michelle Kranot, including festival favorites, White Tape (2010) and Hollow Land (2013), which are both very personal films.

“We involve personal experiences, the lives we live,” Kranot told Cartoon Brew. “I think life gives you the best material for stories.”

Since animation inherently is ‘not real,’ I wondered what exactly classifies an animated film as a documentary. Kranot explained that there isn’t one definition.

“I see it as a wide spectrum,” he explained. “It’s a matter of how strong the element of truth is in the creation, within the subject or the form. This can be a real recorded soundtrack, but also the use of newspapers, live footage or photorealism as part of the visual language. At AniDox, we’re open-minded to any kind of ideas, as long as we feel they tell something about life that really exists.”

Animated documentaries have been around for a century, but Persepolis and Waltz with Bashir in the late-2000s marked a notable revival, inspiring many animated documentary shorts in the subsequent years and even an entire book on the topic

. “We’ve seen the [documentary] genre’s borders expanded over the years, but still there’s a lack of knowledge about the endless storytelling possibilities animation has to offer,” said Kranot. “The main purpose of AniDox:Lab is to spread our knowledge about the medium, which will increase the quality of animated documentaries.”

AniDox:Lab is intended for directors and creative producers from both the fields of live-action documentary and animation. By mixing the two schools of filmmaking, participants are able to enjoy both worlds.

“It’s almost impossible to identify with an animated character the way you can with a live-action person,” Kranot told Cartoon Brew. “So at AniDox, we analyze different ways to create identification. Take the animated short, Father and Daughter [by Michaël Dudok de Wit], for example. The characters are so far away that you can’t see their facial expressions; still, people cry while watching the film. Why is that? It’s because they’re not identifying with the characters, but with what they symbolize. They’re identifying with the metaphor, projecting their own experiences onto the animated characters.”

“Another thing we emphasize is understanding what design does for your film,” Kranot continued. “What does it mean when your film has a minimally drawn line style, or a full CGI rendered one? Sometimes filmmakers are fascinated by a certain style, but it doesn’t suit their story. That’s why, during the last workshop, we attached a visual artist to each project, to work with the directors on their designs. Together, they prepare a short pitch-trailer, so that by the time AniDox:Lab is over, directors are ready to get their project out into the world.”

AniDox:Lab’s application deadline is January 1st, 2016, and is open to animation and documentary directors, as well as creative producers. The program used to be open only to Europeans, but from 2015 onward, the program accepts applications from filmmakers everywhere. Check the AniDox website for information on how to apply.