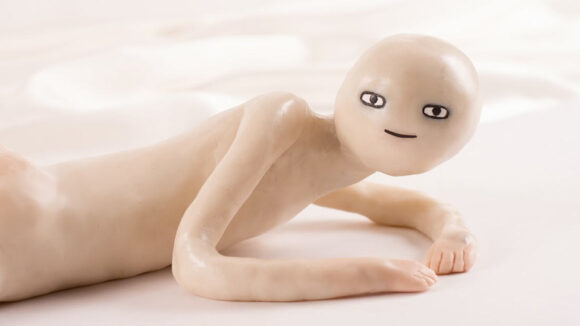 Indie animators rarely, if ever, get talked about on late-night talk shows (or anywhere else in the American mainstream media), so it’s a somewhat remarkable event when one of the gang gets a mention. And it’s downright newsworthy if two different artists get discussed on two different shows in the span of a couple weeks.

First up, there’s Bill Plympton — or at least his name — on The Tonight Show (starting at around the 2:45 mark):

His name enters the conversation after host Jimmy Fallon comments that a drawing of Mike Pence by a nine-year-old reminds him of Plympton’s artwork. Having one’s drawing compared to a nine-year-old’s crude rendering is perhaps not the most flattering way to be discussed in front of a national audience, but beggars (and indie animators) can’t be choosers.

The audience oddly starts laughing as soon as Plympton’s name is uttered; my guess is that people mistakenly heard ‘Bill Clinton’ and assumed Fallon was making a joke.

A conversation then ensues between Fallon, bandleader Questlove, and announcer Steve Higgins about whether an artist named Bill Plympton actually exists. Questlove further adds to the confusion by saying Plympton worked with Frank Zappa (he’s thinking of another animator, Bruce Bickford) while Higgins insists that Bill Plympton is a writer (he’s thinking of George Plimpton). Fallon eventually settles the debate by Googling Plympton’s name and confirming that there is indeed an animator named Bill Plympton. (For the record, Plympton has directed seven animated features and over forty shorts.)

Plympton himself seems to simply be pleased that he was mentioned at all. “I’m going to try to contact their guest department, and demand to have equal time to clear up who I am,” he wrote on his blog. “Maybe I could draw a caricature of Fallon, Pence or even Trump – then America will finally discover me and my work. Hey, I’ve got to start promoting Revengeance somewhere, why not an appearance on Jimmy Fallon’s show?”

A more flattering shout-out to an indie animator occurred recently on The Late Show with Stephen Colbert. In this segment, Colbert talked about and showed a clip of Kirsten Lepore’s online sensation Hi Stranger, originally created for the second edition of Late Night Work Club.

Lepore’s film became a viral hit last month after it was released as a stand-alone film. In Colbert’s segment, he not only showed a clip from the short, but then revealed a parody version of the cartoon with Donald Trump:

Perhaps it’s just coincidental, but both Plympton and Lepore came up in comedy segments related to the current government administration. If there’s one thing the new president and his coterie have been good for so far, it’s increased exposure for indie animators. We’ll let you know if the trend continues.