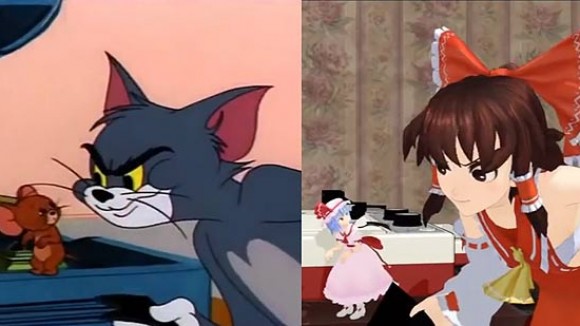 This a Japanese fan-made experiment in which the 1956 Tom & Jerry short Down Beat Bear is remade in CGI with anime girls in the roles of Tom, Jerry, and the dancing bear. The characters don’t appear to be random and likely represent some part of fandom of which I’m not aware. Even lacking that context, I still think it’s a fascinating piece of work, not so much for its animation or technical merit as for its resurrection of (and reverence for) classic theatrical animation in a completely unexpected setting.

In the video below, the new version of Down Beat Bear is synced up alongside the original MGM short directed by Bill Hanna and Joe Barbera. The full-screen version of the CG short can be viewed here. The film was made using a fairly recent freeware PC animation program called MikuMikuDance. (There is also a more recent spinoff of the software called MikuMikuMoving.)