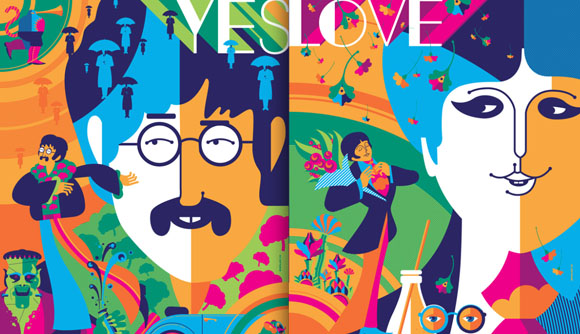 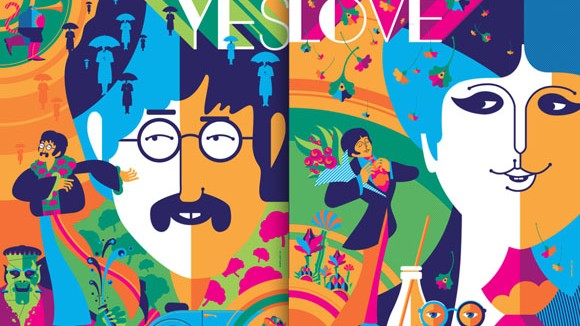 Dark Hall Mansion is releasing this officially licensed Beatles project, a 4-print interlocking Limited Edition set – John, Paul, George and Ringo – in both “standard” (above) and “psychedelia” (below, click thumbnails to enlarge). There will only be 200 of each edition produced, both editions go one sale precisely at 9:30 AM PST at Dark Hall Mansion’s online Store on February 12th, 2013.

More information can be found on these and other editions available at Dark Hall Mansion.

Dark Hall Mansion working closely with Live Nation Merchandise, The Beatles’ North American Licensing Agent, and Apple Corps Ltd will release their new Beatles limited edition screen print set of 4 by leading contemporary artist, Tom Whalen, on February 12, 2013. This exclusive 4-print set stunningly showcases The Beatles unmistakable personas amongst the abstracted milieu of ’60s Pop culture and the landmark film that is “Yellow Submarine.” The 4 prints measure 24″ x 30,” each, and were beautifully composed and designed to work individually or as an interlocked whole when displayed.

Tom Whalen’s 4 new Beatles prints make a striking impression, particularly when viewed as a single quadtych, one meant to artistically render and underscore the personalities of The Beatles themselves. Each print will be individually numbered, 24″ x 30″ in size, and exquisitely screen printed. With an extremely limited release of only 200 sets available worldwide for all Beatles fans, it’s an edition for even the most discerning Beatles collector.

There will also be a very select Psychedelia Edition, limited to just 50 sets worldwide with each print individually signed by artist Tom Whalen and printed with shimmering metallic inks that intensely set off the designs and nuances of his highly stylized artwork.

The 4-print Beatles sets are a limited edition series created by Dark Hall Mansion. ‘The Beatles’ is a registered trademark of Apple Corps Limited. Yellow Submarine is a trademark of Subafilms Ltd © 1968. Dark Hall Mansion is a labor of love. We are passionate about art, about the work of print and poster artists present and past,here and abroad, we are committed to bringing their skills to the forefront on projects both compelling and exciting, bridging their studios and creations directly with your walls and personal collections.