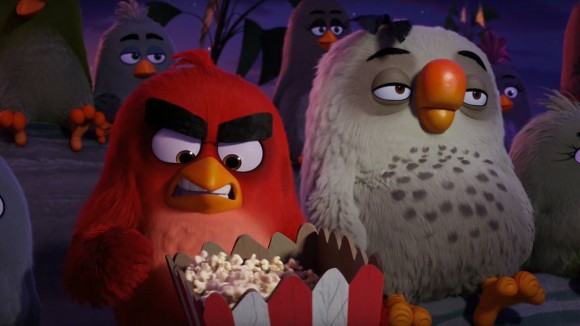 Less than four months away from release, Columbia Pictures released a new trailer for The Angry Birds Movie yesterday, complete with a 45-second scene in which the main gags are piss-swapping and piss-swallowing.

Watersports seems to be de rigueur for selling family animation nowadays; a trailer for DreamWorks’s Home also included a similar piss-drinking gag, along with a urinal cake-eating gag. No surprise, then, that Angry Birds’ writer is Jon Vitti, who also co-wrote Alvin and the Chipmunks, which featured a shit-eating gag.

Both Home and Alvin and the Chipmunks were successful enough at the box office, so the tasteless formulas work. And that’s what will ultimately determine the fate of Angry Birds: Will audiences buy into the predictable family animation formula once again?

The film certainly won’t flounder based on its artwork. As we’ve already established, Angry Birds is a great-looking film. And it has every reason to look great. The animation studio is Sony Pictures Imageworks, which also handles the animation for Sony Pictures Animation films like the Hotel Transylvania franchise. And both of the film’s directors — Fergal Reilly and Clay Kaytis — are industry vets with impressive credits, the latter having been an animation supe on one of Disney’s best modern-CG era films, Tangled.

Angry Birds maker Rovio and its partners are spending some $180 million to make and market this film. Whether audiences will flock to the film remains to be seen, but one thing is for sure: they’ve almost certainly created the most expensive piss-gag in film history.