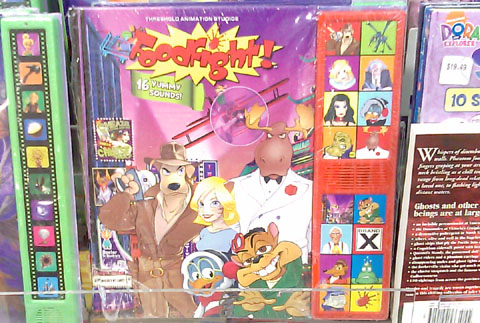 In 2004, CG animation studio Threshold Entertainment and Motion Picture Magic, a product placement company in Encino, teamed up to produce a food version of Toy Story titled Foodfight. Announced with great fanfare, Foodfight would team 80 name-brand products and their associated characters, including Mr. Clean, Cap’n Crunch, Charlie the Tuna, the Engergizer Bunny and the Brawny paper towel man, in an adventure set in a supermarket city – and a voice cast including Charlie Sheen, Eva Longoria, Chris Kattan and Christopher Lloyd. The last time we reported any news on the film was in 2007, when Lionsgate supposedly picked up the film for release.

I’d completely forgotten about the project until Brew reader Kurtis Findlay sent me this pic of merchandising (photo above) he found while he was Christmas shopping. Kurtis says, “I have to say that the characters look far better in 2D than they do in 3D! Do you think the manufacturer of this product got sick of all of them sitting in their warehouse and just released them without the movie tie-in?” Probably. And one look at the characters tells me this film might have better luck remaining unseen and on the shelf.