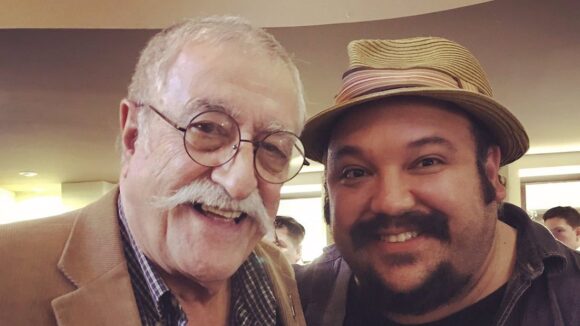 Mighty mustached maestro Sergio Aragonés taught me, and perhaps most of my generation, the importance of a clear, fast read in a funny cartoon drawing – and the universal power of no dialogue!

Sure – appeal, construction, line of action, etc. are all important, but they mean nothing without clarity, which is something Sergio mastered and makes look so effortless.

He studied architecture in Mexico City and didn’t speak English very well when he came to the United States from Mexico (and prior to that Spain, where his family escaped Franco’s dictatorship) so he spoke to the MAD Magazine editors with his wordless drawings. And this “voice” has been beautiful and hilarious ever since. Like many immigrants, he turned his weakness into his strength, and his countless books and MAD cartoons have traveled the world and found an international audience because of this.

But perhaps the biggest lesson he taught me was how humble and noble he was with his fans, both young and old, at any of his signings. Hearing his words meant the world to many young aspiring artists, like this little chubby Tijuana kid at the San Diego Comic Con that Aragonés went out of his way to give advice and encouragement.

To see my hero review my little kid drawing and hear him say, “Keep drawing as much as you can and you just might make it” was life changing. Like many before and after me, I am a cartoonist because of Sergio Aragonés.

Below is the story of how I first met him: