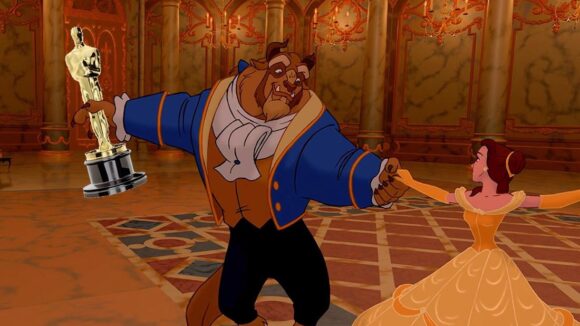 In an era of alternative facts, the Walt Disney Company is generating some of its own. While most people would agree that Silence of the Lambs won the Oscar for the best picture of 1991, Disney is now claiming that Beauty and the Beast won the award.

The statement appears on the back of a new notebook designed to mimic the cover of a VHS tape cover. It is being sold at various Disney Parks and on the Shop Disney Parks app. The dubious claim is a revision of one of the actual VHS covers, which read:

A modern movie masterpiece, Disney’s Beauty and the Beast waltzed away with six Academy Award nominations including Best Picture—the first ever for an animated film. Along with winning the prestigious Best Picture Golden Globe Award, it now ranks among history’s most highly acclaimed cinematic achievements.

In spite of the false claim, the back cover of the notebook offers a more moderate opinion of the film’s achievements. The second sentence tells readers that Beauty and the Beast “not ranks” among history’s most highly acclaimed cinematic achievements.