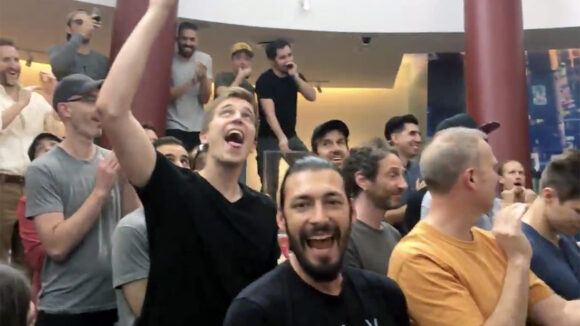 Animators at Walt Disney Animation Studios in Burbank, California, had an impromptu celebration last Friday when the last shot of animation on Ralph Breaks the Internet, the studio’s sequel to Wreck-It Ralph, was approved out of the animation department.

Other artists are still hard at work on the film, as shots still have to go through lighting, effects, rendering, and other stages of production, but as anyone who works in a studio knows, it’s always an accomplishment when the character animation is finished on a feature film.

Yesterday was our last day of animation on Ralph Breaks the Internet! We all got together to take a crew photo in our art gallery space that's been decked out with everything RALPH! #RalphBreaksTheInternet pic.twitter.com/SxonhluiwP

Justin Sklar, another animator working on the film, posted a Twitter thread to help animation fans understand how hard the animators have worked on the film over the past two years:

The Walt Disney Company also released a new teaser for the film on Friday that introduced one of the film’s characters, Shank, voiced by Gal Gadot:

The film opens in U.S. theaters on November 21.