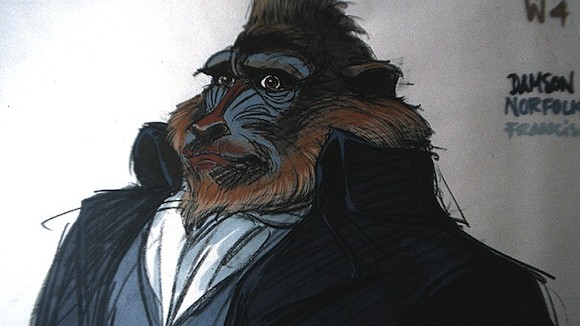 As Disney prepares its live-action remake of Beauty and the Beast, it’s worth taking a look back and remembering that the beloved Disney feature was not always intended to be a musical.

Former Disney visual development artist for Beauty and the Beast and Mulan Hans Bacher has uploaded a six-and-a-half-minute compilation of behind-the-scenes footage from the film’s early development in 1989, including a short clip of a story reel, depicting an early intended opening for the film.

Not commonly known, the film started development in London when key animators Glen Keane (Beast) and Andreas Deja (Gaston), among others, worked on the story under the directorial guidance of Richard and Jill Purdum. The home movies, taken from five hours of unreleased footage shot by Bacher in the Purdums’s animation studio, also reveals early concept art for the Beast’s castle and decidedly porcine designs of the Beast himself.

Among the Disney staffers who can be spotted in Bacher’s clip are producer Don Hahn, Glen Keane, Andreas Deja, Derek Gogol, Mel Shaw, Tom Sito, and Bacher himself. There’s footage of the late Mel Shaw taking a dust buster to the pastel grains on his castle concept art and Disney staff revelling at a wine and cheese party.

The story reel clip, which starts at the 5:17 minute mark, provides a glimpse of a lighter, less gloomy prologue to Beauty and the Beast, with a temporary music box soundtrack, an excised sinister aunt character, and a cheery old-fashioned narratorial style that makes one long for the dark, rich tones of David Ogden Stiers. Executives back in Burbank, California felt that it wasn’t the right take on the story and eventually pushed the film in a more musical direction with different directors. Below is an extended look at the Purdums’s reel:

By his own account, Bacher ultimately quit the film when he saw the finished design for the castle, and has called the resulting film “just another generic looking Disney movie.” Head to Hans’s blog for much more artwork and photos from his time on Beauty and the Beast.