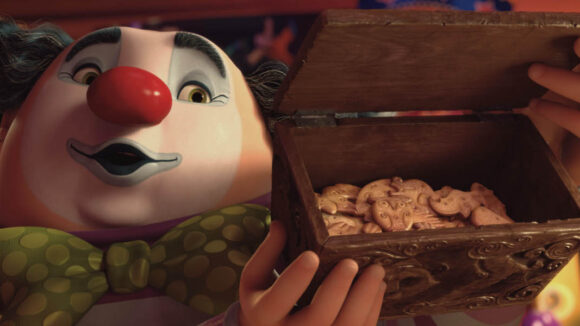 Animal Crackers, a cg family film by first-time feature director Scott Christian Sava and veteran Tony Bancroft, has premiered on Netflix. The fact that it has reached our screens at all is newsworthy.

Why did the film take so long to become available? Because the film has been stuck in distribution limbo for three years. The production, which ran from 2014 to 2017, went over budget, embroiling Sava in financial deals that he struggled to honor. These problems complicated efforts to secure a distributor, and he eventually lost control of the film to an investor, who sold the global rights to Netflix. The saga is recounted in a report by Variety.

So Netflix didn’t produce the film? No. The film was a passion project for Sava, who based the story on a comic he’d written for his sons. Over time, the film secured $19.5 million from investors in Seattle, South Korea, and China. In 2014, the Tennessean reported that he had received offers from Warner Bros., Disney, DreamWorks, Sony, and Harvey Weinstein. None came to pass, and Sava produced the film through his Nashville, Tennessee-based Blue Dream Studios, with the animation done in Spain at a subsidiary of the studio.

What happened then? Sava struck agreements with multiple distributors, which went nowhere. One, Ryan Kavanaugh’s Relativity Media, faced multiple bankruptcies, while another, Byron Allen’s Entertainment Studios, also failed to release the film. When we spoke to Sava in May 2018, he had just pressured Allen to act by unilaterally announcing a release date. “In Hollywood, all you get is words,” he told us.

Meanwhile, Sava was negotiating with Rodger May, a seafood magnate turned film investor, who had loaned him $5 million to complete the movie. Variety details how their relationship soured through disagreements over who was owed what. It culminated in a lawsuit, which saw May take control of the rights.

What about the film itself? It premiered at Annecy back in 2017 to warm reviews. Remarkably for a first-time filmmaker, Sava managed to attract an all-star voice cast, led by Emily Blunt and John Krasinski, as well as an experienced co-director in Tony Bancroft (Mulan). Netflix is finally giving the film the global audience Sava craved, even if it isn’t quite on his terms. He recently told Animation Magazine, “I couldn’t be happier.”