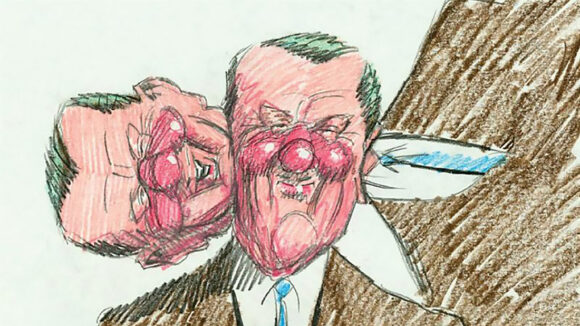 While Plympton has produced plenty of commissioned work throughout his career, he has always maintained ownership of his personal films, which makes a deal like this possible. The deal encompasses all seven of Plympton’s feature films (The Tune, I Married a Strange Person!, Mutant Aliens, Hair High, Idiots and Angels, Cheatin’, Revengeance) as well as over 50 of his shorts, including the Oscar-nominated films Your Face (1987) and Guard Dog (2004).

Shout has not announced a detailed release plan, but it says that it will launch the library titles across multiple platforms later this year.

“Bill Plympton is one of the most distinctive artists in the world” said Fields in a statement. “His unique visual style and subversive sense of humor are a testament to the wickedly creative sensibility that has earned him both critical celebration and a rabid following.”

Adds Plympton, 73, “I am thrilled to be partnering with Shout! Factory to help bring my library of work to a wider audience. With their history of supporting indie and avant-garde animation, I’m excited to work with them to share my features and shorts with animation enthusiasts and film buffs, as well as introduce these works to a new generation of fans.”

Shout! has been acquiring U.S. rights to a number of foreign animated features in recent years, including Tito and the Birds, Big Fish and Begonia, and In This Corner of the World.