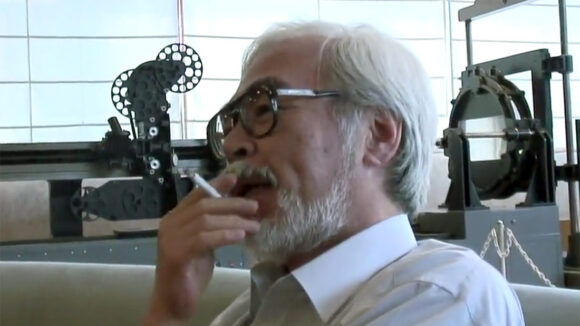 Hayao Miyazaki’s fans can’t complain. In recent years, the anime maestro’s worldview and working methods have been pored over in two intimate behind-the-scenes features: The Kingdom of Dreams and Madness and Never-Ending Man: Hayao Miyazaki. And now the never-ending documentary subject has been given another outing, in the form of 10 Years with Hayao Miyazaki. The four-part miniseries was filmed for Japan’s public broadcaster NHK, which has made the episodes available to view on its website.

Like Never-Ending Man, this documentary was directed by Kaku Arakawa, who has intimately chronicled Miyazaki’s life since 2005. Confusingly, it actually precedes the feature in chronological terms. Whereas Never-Ending Man tracked the director’s career from his short-lived retirement in 2013 to the germination of his forthcoming feature How Do You Live?, this series covers the decade running up to 2013.

It is set during the making of Ponyo and The Wind Rises, Miyazaki’s last two completed features. We see him at work in his private studio and at Studio Ghibli, and relaxing at home — insofar as he’s capable of relaxation. Those familiar with his habits won’t be surprised by scenes in which he criticizes his colleagues, gripes about his old age, or bemoans the state of contemporary society. Even so, the series is packed with quirky vignettes that will delight both newcomers and the Ghibli faithful. Who knew Miyazaki worked to Wagner’s Ride of the Valkyries?

This period also covers the release of Tales from Earthsea, the first feature by Miyazaki’s estranged son Goro, also produced by Studio Ghibli. Hayao’s obvious discomfort at the whole situation is a running theme in the early episodes, and makes for some of the documentary’s most poignant moments. See, for instance, his withering assessment of Goro’s achievement after the film’s premiere: “He’s not an adult yet. That’s all.”

Arakawa was given access on the condition that he film alone, and the result is a rough-and-ready fly-on-the-wall aesthetic. Viewers who know nothing about Miyazaki may struggle at times with the lack of a broad context. But the series works well as an intimate study of the creative process of one of the world’s supreme animators; it nicely complements the other documentaries about Miyazaki, not to mention his autobiographical writings.