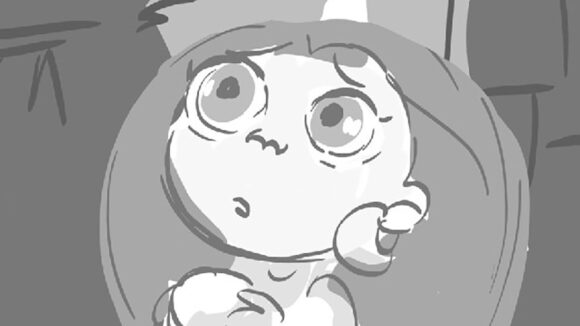 This week, the team behind Cartoon Saloon’s Wolfwalkers learned that their film has been nominated for an Oscar. If there was a statuette for best behind-the-scenes essay, we could hand it to the film now: story artist Iker Maidagan has written an excellent account of his work on the project. Read it on Medium here.

The article is, before anything else, a spotlight on the under-appreciated work of story artists, who bridge script and animatic. Maidagan lucidly explains what this role entails — at least at Cartoon Saloon, for Maidagan is at pains to distinguish its approach from those of studios he previously worked at (which he found “disappointing”).

Wolfwalkers also marked a change within Cartoon Saloon: for the first time, the studio had a “proper story team.” At the same time, the absence of a head of story enabled artists to work closely with the directors, Tomm Moore and Ross Stewart. “In my experience,” Maidagan writes, “this not only made communication a thousand times faster, it also allowed for a better understanding of the feeling the directors were trying to convey with each scene.”

As Maidagan recounts the film’s tortuous narrative development — five animatics in a year and a half — he describes plenty of deleted scenes, some of which are shown in the copious boards published alongside. We’re made privy to insider’s tidbits: we learn, for instance, that Moore and Stewart toyed with the idea of recording the film in 17th-century English. Ultimately, we learn how Maidagan’s years of fervent work warped his experience of the finished film, which he watched a little uncomfortably, unable to “remove myself from the animatics I had seen a thousand times just a couple of years before.”

It’s rare for an artist on a major animated feature to write such a thorough, revelatory account of their time on the project so soon after release. Maidagan stresses the importance of candidness and clear communication in the making of animation. His article exemplifies both.