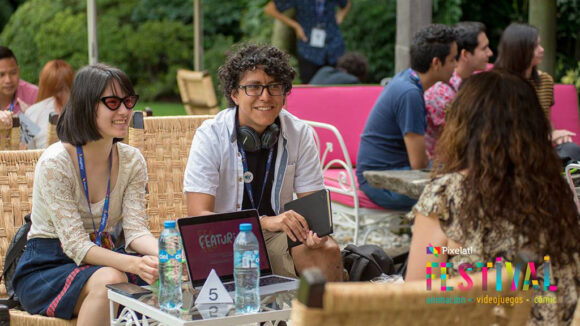 On Wednesday, in Cuernavaca, Mexico, the 11 finalists of this year’s Pixelatl Ideatoon competition presented their final pitches to a jury of executives and producers from Cartoon Network, Netflix, Amazon, and more.

Though Ideatoon is formatted as a contest, the opportunities presented to its finalists are worth much more than any cash prize. From a pool of 250 applications from all over Latin America, the creators of 24 projects were selected to participate at the Ideatoon Bootcamp in May, not just to compete, but to further develop their projects to their utmost potential, before being whittled down to the 11 finalists that presented this week at Pixelatl.

One of this year’s finalists is Rapper Ripiti, a cgi children’s series that features 10-year-old frog Ripiti, a singer who learns to rap as a solution to the nervous stutter she develops on stage. For creators Gabriel “Pich” Pichardo of Sociedad Fantasma and Yasmin Islas, the Ideatoon Bootcamp was an invaluable resource for refining their pitch. As a result of the advice from the many mentors they worked with, they ended up changing some key aspects of Rapper Ripiti.

“First of all, we changed the audience, because at the beginning, we planned it to be for 9- to 12-year-old kids, but they told us that the style may be better [for] a younger audience,” says Islas. “Now, it’s [for] 4- to 6-year-olds, [because] it’s very colorful and cute. They also told us that it might be fun [for] toddlers [who] are beginning to speak, for them to try to sing and rap.”

Mentors in attendance at the bootcamp last May included Alison Warner, vice president of IP sales, acquisitions, and co-productions in Technicolor’s animation department, as well as Ann Austen, creative producer at Mattel Creations, and Humberto Cervera, producer at Cartoon Network Latin America. Warner was assigned to Rapper Ripiti, and Pichardo and Islas say she helped them with some of the finer points of salesmanship.

“[The bootcamp] was all about the mentors that came. They were leading us all the time,” says Pichardo, who also won last year’s Ideatoon with his project Glitch Sandwich. “I think it’s great because maybe we know how to draw, and we know how to animate, but how to sell and how to make projects that people [want to] consume, it’s not easy.”

Brothers Roy and Arturo “Vonno” Ambriz of Mexico City-based stop-motion studio Cinema Fantasma took a slightly different approach to dealing with mentor feedback for their feature Ballad of the Phoenix, but appreciated its worth all the same.

“A lot of judges [at the bootcamp] said, ‘No, no, no, don’t even think about doing it in stop motion. It’s impossible. The drawings look good, make it in 2d or 3d,” says Vonno Ambriz. Instead of taking their advice, the brothers decided to arrive at Pixelatl with a full stop-motion teaser for the film and show their main phoenix puppet to any naysayers.

“All this feedback, all these opinions by the great players of the game, really helped us. [Their comments let us] know that there is a red alert somewhere, and we need to pitch it better, so [these] problems don’t appear next time,” continues Vonno.

The Arthur’s Watch creator Rafael Coffee and screenwriter Hannah Rocha have been similarly impressed with the support they’ve received from Ideatoon. They weren’t able to make it to the bootcamp in May, due to trucker strikes in their native Brazil, but were able to deliver their initial pitch via Skype, despite connectivity issues.

“They said, ‘Look, we have problems in the connection, but we really like your project. We will keep in touch.’ I was like, ‘Oh, it’s over for us,’” says Rocha.

“We literally [gave] up in this moment,” adds Coffee, laughing.

Coffee and Rocha chalk up their invitation to the final summit to how “nice” the bootcamp judges were, but more realistically, it’s owed to the quality of The Arthur’s Watch, an adventure feature that aims to deal with Alzheimer’s disease in a way that’s accessible to children.

The winner of this year’s Ideatoon will be announced tomorrow, but Roy Ambriz says he isn’t concerned with the outcome. He cites Alan Ituriel’s Villainous, which was first pitched at Ideatoon in 2014, and is now being produced by Cartoon Network Latin America, as a prime example of Ideatoon’s success as a development program, and not just a contest.

“What we like about this contest is not the award, per se, but the opportunity to pitch [our project] to real companies, to real studios,” says Roy. “And for us, being in Mexico, it is sometimes difficult to travel to those major festivals like Annecy or Kidscreen, so to have them all concentrated for us in this paradise is really useful. I think that’s the real award of being [part of] this competition.”