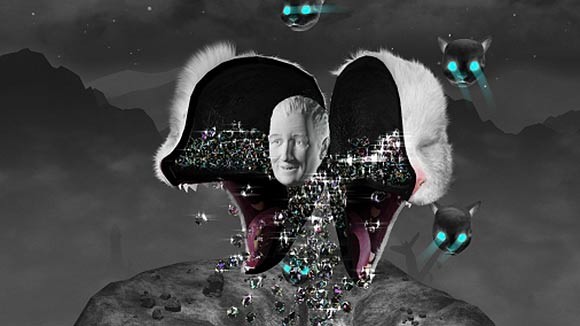 Tonight in downtown Los Angeles: Beyond 3D: The Animated World of David OReilly, a retrospective of work by the Irish filmmaker.

Look around at what other people produce nowadays, and OReilly’s lo-fi experimental fingerprints are smudged all over the contemporary animation scene. Equally remarkable as his widespread influence is his rapid ascent as a leading animation figure. This is, after all, a filmmaker whose professional career is less than a decade old, and whose name wasn’t even known eight years ago.

Curated by Steve Anker, dean of CalArts School of Film/Video, and Bérénice Reynaud, tonight’s program will focus on OReilly’s film work, though his creations are scattered throughout television, feature films, and games as well. OReilly will appear in person. In addition to the announced program, we’ve been told a “major new piece” will debut. Here’s the program description:

Having popularized stripped-down graphics and glitch effects, David OReilly opened up the aesthetic horizons of 3D animation with richly imagined lo-fi absurdism and a surprising soulfulness. Known for the influential shorts Please Say Something (2009), winner of top awards at the Berlin and Ottawa film festivals, and The External World (2010), he was Cartoon Network’s first-ever “guest director” on the fifth-season opener of Adventure Time, and created video games for Spike Jonze’s Oscar-nominated film Her. The animation star has since developed his own high-concept game, Mountain.

Please Say Something
(10min., 2009, HD)
A troubled relationship between a cat and mouse set in the distant future.

The screening begins 8:30pm at the Redcat Theater (631 W. 2nd St, LA, CA 90012). Tickets are $11 general admission, $9 students, and $6 CalArts students/faculty/staff. There’s nearly a hundred people already rsvp’d on the Facebook invite so you may want to pick up your tickets soon.