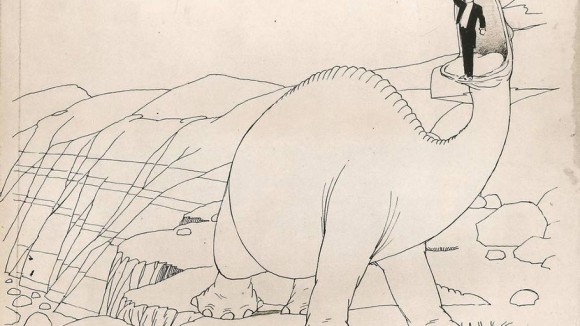 John Canemaker has single-handedly done more to promote and preserve the legacy of pioneering animation filmmaker Winsor McCay than anyone else. His biography of McCay

remains the first and last word on the subject, and over the past year, to celebrate the 100th anniversary of McCay’s groundbreaking animation of Gertie the Dinosaur, Canemaker has re-introduced McCay’s films to numerous live audiences.

Tonight at the Museum of Modern Art in Manhattan, Canemaker will present four of McCay’s films—Little Nemo (1911), How a Mosquito Operates (1912), Gertie (1914), and The Sinking of the Lusitania (1918)—and in front of a live audience, he’ll recreate McCay’s original vaudeville act with Gertie. A visual lecture will accompany the films.

“Long before any princesses wandered across the screen,” Canemaker said in the event’s promo listing, “animation’s first female personality was spunky Gertie the Dinosaur, who celebrates her 100th birthday this year. McCay’s breakthrough film is a masterpiece of early character animation, a type of individualization in animation whose legacy is the pantheon of Walt Disney.”