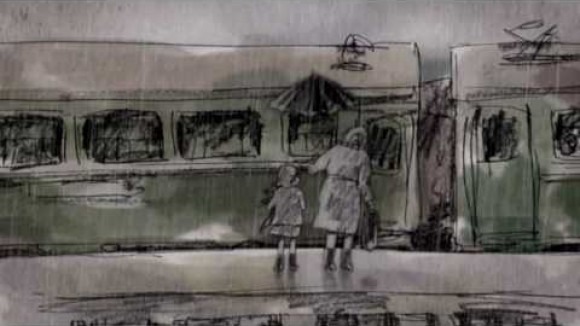 Last Sunday the 17th Stuttgart Festival of Animated Film announced its winners. I’ve seen about half of the films on the list, and it’s a very strong line-up. It encourages me to see so much excellent animation being produced nowadays, even if virtually none of it is made in the US. The Grand Prix was awarded to Joseph Pierce’s A Family Portrait (view a clip here). Pierce’s graduation short, Stand Up, left an indelible impression on me when I saw it a couple years ago and it’s exciting to see him pushing his style further. His work transforms the clunky rotoscope technique into a striking and artful form of personal expression that proves the viability of the technique when placed in the hands of a gifted artist.

The Lotte Reiniger Promotion Award for Animated Film was won by David LÃ³pez Retamero for his Royal College of Art short Sam’s Hot Dogs. Again, it’s not online, save for this tantalizing clip.

One of the award-winning films at Stuttgart that is available online is Nina Bisyarina’s A Trip to the Seaside, a beautiful and sensitively drawn piece of animation hailing from Russia:

In the student category, a special mention went to Lebensader by Angela Steffen, which has a full website with clip at Lebensader-Film.com. When I was on the Ottawa jury last year, we awarded her film the festival prize for graduate animation. She was also an animator on Andreas Hykade’s film Love and Theft which was featured on Cartoon Brew a few days ago.

The top student prize belonged to Parade by Pierre-Emmanuel Lyet, an exercise in graphic minimalism: