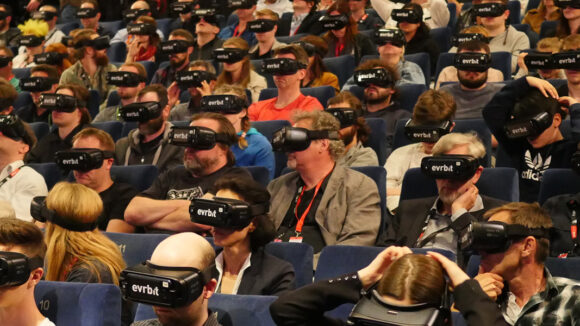 FMX is one of the bigger visual effects, games, animation, and interactive media conferences of the year, but if you haven’t been before, it can be a little overwhelming trying to find out just what takes place there and whether it might be for you.

That’s why Cartoon Brew has prepared this guide to the upcoming FMX 2019, which is run by the Filmakademie Baden-Wuerttemberg and organized by Animationsinstitut, and is happening in Stuttgart, Germany from April 30th to May 3rd.

There’s a lot going on at FMX, so our guide might only scratch the surface. But here we cover what kinds of things are on show and whether they suit students or pros. We also look at some of the already announced sessions you should look out for, and we dive into some tips for making the most of your time at FMX.

What FMX is perhaps best known for is featuring big-release vfx and animated features and speakers in its large halls. Just some of the main films that will be discussed include Missing Link, How to Train Your Dragon: The Hidden World, Spider-Man: Into the Spider-Verse, First Man, Solo: A Star Wars Story, The Lego Movie 2: The Second Part, The Meg, Ralph Breaks the Internet, Wonder Park, Christopher Robin, and Spies in Disguise. Similarly, television shows will be highly represented, including Game of Thrones and Lost in Space.

Outside of ‘making of’ talks about recent releases, FMX also showcases a wide gamut of tracks that cover the business side of the industry, technological developments (look out for the light fields, rendering, and deep learning sessions), and the art side. Then there’s a host of vr/ar/immersive entertainment sessions, as well as sessions that cover smaller projects.

Some of the big names coming along to FMX – and there are a lot – include director Rupert Wyatt, Doug Chiang (vice president and executive creative director of Lucasfilm), John Gaeta (SVP creative strategy, Magic Leap), Kim Libreri (CTO, Epic Games), Trisha Gum (co-director, The Lego Movie 2), Rob Bredow (ILM visual effects supervisor, Solo: A Star Wars Story), and Paul Debevec (Google VR). Attending sessions from industry heavyweights can be a great way of seeing lots of different work from around the world, and being inspired to learn more, particularly for those already in the industry.

Advice from the pros

The big speaker sessions are always entertaining, but it’s not necessarily here that you’ll learn any particular software tricks or techniques. That’s where the ‘Company Suites,’ ‘Workshops,’ ‘Marketplace,’ and ‘Masterclasses’ side of FMX come in. These suit both students and professionals, and they reflects somewhat of a trend at events like FMX and SIGGRAPH where particular software companies set up their own rooms at the conference and have constant demos presented by real artists in the field.

For example, SideFX has a Houdini company suite (they call it the Houdini Hive) and it typically has Houdini artists from major studios giving insights into particular effects shots from the latest films and television shows where that software has been used. Autodesk will also have a suite at FMX, likely to demo Maya, Shotgun, Arnold, and other tools. The Foundry, which sells Nuke, Modo, and Mari, among other vfx tools, will also be at FMX. Meanwhile, visual effects studio Dneg has taken up one of the company suites to present work done on their shows and films from the past year; it’s a good way to find out what particular studios do if you’re looking for a job with them.

Other companies that’ll be running workshops, including Maxon, Renderman, Xsens, Ftrack, and Chaos Group. This is one of the best ways to hear directly from artists using particular pieces of vfx and animation software. Some demos also take place on the Marketplace floor, which is similar to an exhibition space. Often here you get a chance to ask more questions about new releases of software and hardware. Finally, there are masterclasses, including Ed Hooks’ ‘Acting for Animators’ classes, to attend for extra training.

Get a job at FMX

The conference easily has one of the busiest and buoyant careers fair of any other similar kind of event. A large room houses booths from vfx studios and animation houses – look out for studios such as Framestore, Dneg, Rise FX, MPC (which, as part of Technicolor, has a recruitment entity called The Focus), Axis Studios, Illumination Mac Guff, and more. Then there are also individual recruiting presentations to hear more about each studio.

Tips for making the most of your time at FMX

The toughest thing about FMX? Scheduling your time. Different tracks and events of course all run concurrently. So you really have to plan out which things you want to see. Luckily, most things happen in the main location, the Haus der Wirtschaft. But there are a few other close-by venues, so make sure you get your head around the place names.

The FMX app is the best way to keep track of what’s coming up, and where things are located. It will be available early April. The app informs you when rooms are filling up – it can be handy to know when to try and get there early. If rooms do fill up, some sessions are being live-streamed (but only a few).

Each day after the sessions there are numerous drinks, meet-ups, and sometimes even screenings. Not all of these are broadcast widely, so keep your ear to the ground. It’s recommended to visit the websites of studios or software or hardware companies to see what kind of FMX-related activities they are planning this year.

One tip is to take advantage of FMX’s relatively intimate setting. It’s common for speakers to be available right after their talks for a chat, or to simply be able to talk to in the corridors, or at an event in the evening. There’s a relaxed vibe at FMX, and the place is a bit of a melting pot of industry veterans, artists, and students.

The other thing to do – after FMX and even during the event – is to attend the Stuttgart International Festival of Animated Film (ITFS). This actually happens concurrently with FMX, and features screenings and talks about animated features and shorts in and around Stuttgart, including outdoor screenings in the large Schlossplatz right in the center of the city.

Stuttgart’s central city areas are a short walk away, which means there’s plenty of places to eat and drink during FMX. Meanwhile – and fortuitously – Stuttgart’s Spring Festival (Frühlingsfest) happens right around the same time as FMX. If fairground rides and beer are your thing, add an extra day before or after FMX to make sure you go there, too.

The tickets available include four-day conference passes for both students and professionals, or day tickets for students and pros (you can also buy combo-tickets to attend the ITFS). During the week, some screenings tend to be available by lining up at certain times. Workshops occasionally need pre-registration with the particular company – but in general it’s all about lining up early. Head to the FMX website for more info.