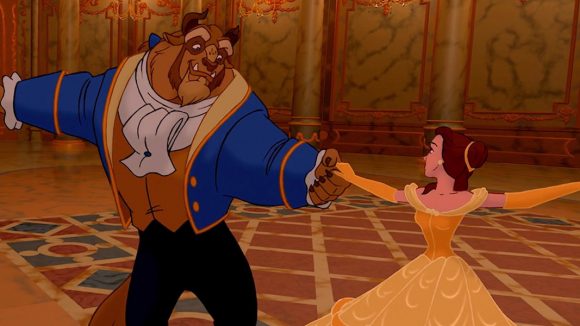 In 1991, it was still the very early days of relying on digital techniques to help make animated features, and even live-action features. Although Disney had began using its Pixar-developed Computer Animation Production System (CAPS) system for digital ink and paint and Pixar itself had already demonstrated the power of cg animation in several shorts, computer animated features were still something to dream of. But then came Beauty and the Beast’s ballroom dance sequence, in which the possibilities of digital techniques were explored a little further.

Here, hand-drawn traditional character animation would be combined with cg imagery, composited with CAPS, to enable sweeping camera moves as the dance progresses. Overseeing the cg work for the ballroom sequence was cg supervisor Jim Hillin.

Now, on Beauty and the Beast’s 30th anniversary (the film was released nationally in the U.S. on November 22, 1991), Cartoon Brew looks back with Hillin at how the cg ballroom shots were achieved, how another scene nearly adopted the same approach, and what technical solutions were required to finalize the work.

Cartoon Brew: How did you come to work on the ballroom sequence for Beauty and the Beast?

Jim Hillin: I had just finished work on Jetsons: The Movie for Hanna-Barbera around 1988. Beauty and the Beast producer Don Hahn got a hold of my name and had his office call me up, and asked if we could have a phone conversation. Well, we tried to have that while I was on a plane to Boston, but we couldn’t hear each other over the sound of the engines. But when I got back to L.A. I went over to Disney and had an interview.

I think the thing that really clinched it for them was—and it was a criticism I’ve heard of cg departments everywhere—they said, ‘Our problem is that whenever we send things over to the cg folks, they say they can do anything and they take on the job and they return something, but we never really understand when it’s coming back.’ I basically said, ‘So, what you’re telling me is that the group that you have doesn’t quite understand what they’re capable of?’ I knew that this was going to be about scheduling time and tasks and I thought I could handle all that because I’d been doing it for a while.

So what was the problem that needed to be solved for the ballroom sequence, as presented to you?

Jim Hillin: They said, ‘Well, we have this big ballroom sequence; we want to do the ballroom in cg.’ And I said, ‘Okay, so it’s basically just one room.’ They said, ‘Yeah, and we’re going to be moving a camera around inside of it.’ But then they said there was also this other sequence. They said, ‘We have this big fight scene at the end of the movie where the Beast is fighting the main villain on the roof,’ and they wanted me to do the rain and the roof for some dynamic shots there.

Now, there had been another group, another producer and director, on the film already and we only had about nine months left by the time I was hired to finish the movie. So I said to them, ‘Well, I don’t know if I can guarantee two cg things. I can get one done – the ballroom – for sure, but as far as getting the second one done I’m not sure.’ You also have to keep in mind I didn’t have a huge kind of budget. I think the whole budget for the original film was something like $20 million or thereabouts.

It was still pretty early on in computer graphics in films, so did you know this was something that could be solved?

Jim Hillin: We had five people doing computer graphics at the time, and really back then – 25 years ago – the computers we were using were probably about a tenth of what your phone can do nowadays. The other thing was the software. Disney had only been using it to print out wireframes and not really render anything. They had never done 3d rendering. So we had to set up a whole software pipeline for getting this done.

Plus, Disney had never really done a moving background in any of their films. I went to this warehouse called the ‘Morgue’ where they keep everything Disney has ever made. And they have these people who are like librarians there. And I said to them, ‘I’d like to see any film with any moving backgrounds that Disney has ever made.’ And the only thing they had was the multi-plane stuff that had been done for Bambi, and some multi-plane work that had been done for Sleeping Beauty for the introductory sequences.

So I had to think, how do we make this ballroom scene look like something Disney would make? I went to the head of the background department and I said, ‘If you were going to paint the ballroom what would it look like?’ And it took him about two weeks and he painted this big painting of what the ballroom would look like inside. And of course he calls me at one point and goes, ‘Do I really have to paint all these windows in the back?’ And I said, ‘No, this is fine, this is fine.’

What was that painting for?

Jim Hillin: We then had something to copy. So, as long as we could make our ballroom in cg look like their ballroom in a still frame, then the next thing was we just had to move the camera and we were off to the races.

What were some of the techniques or tools that were being used to actually produce the cg model of the ballroom?

Jim Hillin: Well, it’s not that different from today, frankly. Renderman had been around—it was created by Pixar before Pixar made any full-length movies. And it made nice and pretty images. I’d been using that already since 1988, and I said, ‘Well, we’re going to use that because it’s about as tried-and-true as you can get in a renderer,’ because a lot of people have been banging on it, and making it work. Then, the top-of-the-line modeler at the time was made by Alias out of Canada. Alias has now become Maya and is owned by Autodesk. The nice thing was the industry was growing up a little bit. It was a time when they were finally beginning to be standards for how to do this stuff—how to put together a scene, how to create a material that responded the same way every time, all that kind of important stuff.

What was the workflow here—the main characters were still traditionally animated weren’t they?

Jim Hillin: Yes, because of the time constraints, we had to do the sequence in parallel with the traditional animators [James Baxter hand-animated Belle and the Beast]. What we did was use a special plotter where we printed out the wireframes. Then we gave the animators registration marks and a bunch of other things so they could physically line up their work and start animating.

At one point, I talked to Glen Keane [the supervising animator for the Beast] and I said, ‘This is what I’m thinking about doing,’ and I brought him an example of a printed out frame of the background they were going to be dancing in. And I gave him an overlay of the floor and an overlay of a grid that fit on the floor, which was three feet by three feet. The idea was that it represented every three feet on the floor and would give them an idea of how to animate: how far to move their feet if they were animating a waltz, for instance. When he saw the grid he went, ‘Oh this is perfect. I don’t need anything else.’

Was there ever, to your knowledge, a conversation about animating any of the characters in cg?

Jim Hillin: No, I don’t know if that was ever brought up. I think as close as we ever got were some of the carts in the film and the wheels turning because they were racing by and changing perspective and nobody wanted to [animate] them. We did have to make some approximations of Belle and the Beast for the ballroom sequence, just to show Jeffrey Katzenberg that it was going to work. We made these crude geometric representations of them to show where they would be in the shots. And then we cut that all together with music and showed it to Jeffrey, and he goes, ‘Yeah, this will work.’

How did this all fit in with the digital ink and paint system, CAPS, that Disney had been using?

Jim Hillin: Well, interestingly, CAPS certainly was largely a digital ink and paint system, but a big part of it was also keeping track of everything. A huge piece of this system was the database. It kept track of everything, every change, every piece of paper, every note – everything. So the amazing thing about that was it was just this giant database handler.

As far as integrating the 3D stuff into CAPS, we created a background of a certain pixel dimension size. And then we just delivered the final imagery of the background into CAPS. If you want to think of it as ‘uploading,’ we were just uploading the images one at a time into positions on an exposure sheet inside of CAPS.

All of the pieces – the characters, props, and the backgrounds were separately scanned and painted in the system inside of CAPS and then they were composited together like layers in CAPS. Exactly the way you would do it if you were putting it on acetate.

What do you remember about the reception that this sequence had when the film opened?

Jim Hillin: I remember that the producer Don Hahn had written me a nice note saying that it was the sequence of the film and that it was really amazing. And I thought, well, he’s just being nice. I didn’t pay much attention to it but when it came out the sequence was just all over the press. And I was like, wow, that’s cool. Of course, nowadays if I mention to someone that I was in charge of cg for Beauty and the Beast with the ballroom, there are people who stare at me and go, ‘You’re kidding!’ Even today it still garners quite a bit of attention.

Jim Hillin has since worked at several vfx studios including Digital Domain, Sony Pictures Imageworks, and Entity FX. He worked again at Walt Disney Feature Animation for “Dinosaur” and at Warner Bros. Animation on “Looney Tunes: Back in Action.” He is also behind the comic strip “Wireheads.” Jim is currently a cg supervisor at Duncan Studio.

(This article was originally published on Cartoon Brew on November 22, 2016.)