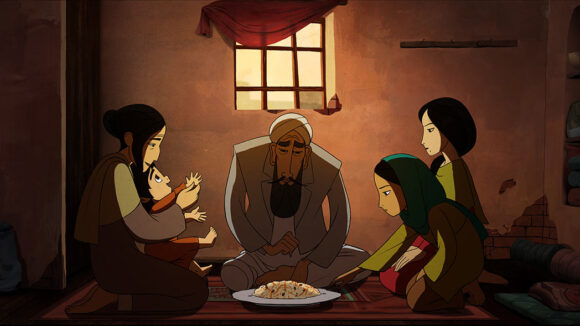 One of the highlights at Annecy yesterday was the work-in-progress session on The Breadwinner, the highly anticipated third feature-length production from Kilkenny, Ireland’s Cartoon Saloon (The Secret of Kells, Song of the Sea).

The film is based on the novel of the same name by Deborah Ellis, telling the story of Parvana, a young girl living under the Taliban regime in Afghanistan who, after her father’s imprisonment, disguises herself as a boy to become the family’s sole income earner.

This fall, New York-based feature animation distributor GKIDS, also an executive producer on the project, will release the movie into North American theaters. Cartoon Brew spoke via Skype with director Nora Twomey (head of story on Song of the Sea, creative producer on Puffin Rock) in a wide-ranging conversation about the naturalistic performance style of the film, delivering high quality on a modest European budget, and balancing the dual tasks of being a film director and studio owner.

Cartoon Brew: The Breadwinner is quite naturalistic in style. What was this choice based on?

Nora Twomey: More than I had done before, [this story] was about characters – it was about the simplicity of their faces, and little gestures that they made. That informed the look of the film.

We always wanted to make something that’s very ‘inviting-looking.’ Something that the audience doesn’t have to work too hard to feel a part of it. Because the subject matter is challenging; it’s about a little girl growing up in a time of conflict – that’s hard enough. So we wanted to kind of sugar the pill in a way that made it feel beautiful, and that you had a sense of the breadth of Kabul, and the beauty of the place.

Was this style choice set from early development onward, or did it evolve?

Nora Twomey: Reza Amirraihi, who has been the art director, designed the characters in a very kind of graphic style…[So] we started out with a very kind of graphic style of animation, where we were fitting our characters into the compositions, and fitting them into their poses. And as we got into production, we began using a much more naturalistic style of animation because it just seemed to fit the story that we were telling. Little tiny gestures like somebody scratching their head or whatever. These subtle things that really may give the performance a kind of human anchor point became really important.

It was a very organic progression. We knew we really wanted [the film] to be led by the performance of the cast. As much as we could, we’d cast within the Afghan community. I’d say about 50% were cast of Afghan descent; they gave a lot of depth to the film. We had some actors coming in and telling us about their childhood, growing up in Afghanistan. And then they went out to give performances to [characters] that sounded like somebody from their village. So that gave us a lot to go with. We filmed everybody’s performances so that the animators could get a different kind of sense of physicality. Because the way that the body is used is different. Like, Afghan people, wouldn’t use their hands as much as I would.

Besides the hand-drawn frame-by-frame style for the real world, there’s another world in cut-out, which visualizes the stories the main character tells others. What’s the technique behind the cut-out?

Nora Twomey: We did a lot research on [real] cut-out, but the actual animation is digital. We wanted to give the sensation of somebody spending, like, 20 years on a cut-out film, without spending 20 years. [laughs] I knew that we couldn’t afford the warehouses and the rigs, so [sequence director] Jeremy Purcell used Moho for the rig characters, and with Guru Studio in Toronto they lit them in such a way that it looks like cut-out animation. It went way beyond my expectations.

A look at the different stages of the cut-outanimation process for Cartoon Saloon’s “The Breadwinner.”

What did the research process look like for the cut-out style?

Nora Twomey: We had a cut-out animator [at Cartoon Saloon], Janis Aussel, who worked here in the basement and was kind of a seed for everything. Whatever she shot, we looked to see if we could replicate that. We would try to give ourselves the boundaries of cut-out animation; if we couldn’t do it in cut-out, we didn’t want to do it with Moho.

The Breadwinner’s characters have a different culture than yourself. Besides studying the performances of actors from Afghan descent, how did you connect with your characters?

Nora Twomey: I had to find the things I have in common with the characters that I’m trying to show in the film. Coming from Ireland where my own mother had to quit her job when she got married, because it was illegal to hold down a state job and be married at the same time, we’re not too many generations away from the kind of struggles that our main character has.

But our main character doesn’t express herself the way that I might express myself, or the way somebody from my country might express herself. We found out all these things from the consultants, like the sense of responsibility that Afghan children have for their friends and family, more than an individualist kind of culture. All of these things were very new to me, and to try and find a story in that, that I can relate to, or trying to make it as universal as I can, was a challenge.

A look at the different stages of the animation process for Cartoon Saloon’s “The Breadwinner.”

With European feature budgets you have choose what to spend your money on. What kind of choices did you make in that regard?

Nora Twomey: You know, this is our third time around at this point. So we’ve become very good with identifying [production] partners that will want to put the money on the screen as much as we do. So [we worked] with Studio 352 in Luxembourg, and with Aircraft Pictures and Guru Studios in Canada – studios that were really wanting to make the project look as beautiful as we possibly could. You can’t buy that, I think, no matter whether you’ve got 100 million to spend, or 10 million. That’s the kind of commitment to a story that you can’t buy – that’s got to do with people’s enthusiasm. And we were so lucky with this project, that we found so many people with such great enthusiasm for the film.

As the director, what creative choices did you make during production to stay on budget?

Nora Twomey: I suppose it’s retakes – how can I minimize retakes? They’re so expensive. As a director, if you’re not communicating in a way that minimizes the amount of retakes that somebody has to do, then you’re not doing a good job and you’re wasting money.

What would you say is your directing style?

Nora Twomey: In some ways I’m a control freak… In terms of the early on part of the production – the animatic. On those first four or five passes of storyboards, I’m an utter control freak. So I’d do the whole temp track myself. I’ve done every sound and piece of music, for temp, and managed the whole film myself until I felt I knew it – when I knew it enough that I could communicate to all the heads of departments. And then I’d hope I can be generous with that. Because you have to trust them. I’m not a person who wants to spend 10 years on making a film myself. I want to see what’s best in my heads of departments, and then they can see what’s best in their animators, or their background painters, or the comp people.

Working on a production like this made me so aware of the talent I was surrounded with: Ciaran Duffy and Reza Amirraihi on the film’s art direction, Jeremy Purcell, Sheldon Lisoy, and Sanatan Suryavanshi working on the look for the storyworld segments, Fabian Erlinghauser on animation, John Walsh on clean-up, Darragh Byrne on edit, Mark Mullery as TD – each of these headed up a team of highly skilled people. And Stuart Shankly, my incredible assistant director. As a director, your film will live or die on the dedication of those around you and I was privileged to be surrounded by such a team.

What are the big challenges of being a first-time feature film director?

Nora Twomey: A lot of the job is saying ‘no’ to people…[A feature film production] is kind of like a big swarm of bees or something [laughs], that have to move all at once, in one direction. Every day you see brilliant, great ideas, but [it doesn’t work] if they’re not exactly in the style of art direction or the style of character animation or the style of composition even. All of these things have to move in this one direction. These are things that might be acceptable, or almost acceptable, as an audience member watching it, but again – anything that shifts away from the unity of the whole project, my job is to kind of say ‘no.’ It’s a difficult thing.

Besides being the director of The Breadwinner, you also co-own the studio that produces it. How do you combine those roles?

Nora Twomey: As a director you want to push for something, but you know the financial situation as a studio owner on the other side. So yeah, it’s tough, but we’ve been doing that ever since the first e-cards that we made. As a director you can’t think, ‘Nothing is impossible.’ You have to realize your limitations and then [find a way of] existing within those limitations. And make the most of them.

You co-own the studio with Paul Young and Tomm Moore. What’s your creative cooperation like with Tomm and Paul?

Nora Twomey: Tomm and Paul are my closest creative confidants. And that has always been the case for our nearly 20 years now together. We’ve fallen into a way of working together, which is very easy, I suppose, and natural and honest. And it’s a friendship at the end of the day.

I can imagine it’s tricky nowadays to make time together for creative feedback – is it?

Nora Twomey: It is and it isn’t. I mean, we’re all in the same building. I come down to make my cup of tea and walk into Paul. And Tomm is across the way from me. We’re literally in the same room. So no, it’s not that hard. [laughs] The days are tough, and as the business becomes more successful, our time, or each person, is spread a little thinner. But we can [handle it] because we have a deep history together at this point now. It’s hard to shake that kind of a core understanding.