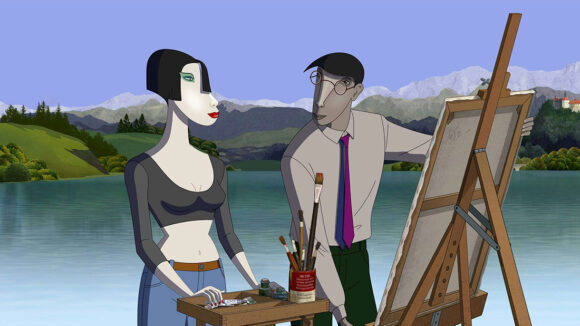 Primarily hand-drawn (with some cg elements), adult, and dealing with complex psychological themes, this English-language feature from Hungary looks and feels like no other animated feature in the marketplace right now.

In the film, psychotherapist Ruben Brandt suffers from terrible nightmares that are triggered by classical works of fine art. To stop the episodes, he recruits four of his patients, all of them skilled thieves, to accompany him to famous art museums around the globe and steal the paintings causing him distress. As the reward for Brandt and his crew grows, they’re chased around the globe by gangsters and bounty hunters, while a group of insurance companies hires an American detective and art-theft expert, Mike Kowalski, to solve the crimes.

This is the first animated film that Krstić, 66, who also paints and works as a multimedia artist, has made since 1995, when his animated short My Baby Left Me won both the Silver Bear at the Berlin film festival and best first film at Annecy.

In a recent interview with Variety, Krstić said of his new film’s plot, “To be haunted by ghosts or zombies in nightmares is a cliché; it’s more exciting to be haunted by Velázquez’s ‘Infanta Margarita’ or Botticelli’s ‘Venus,’” adding that the film’s visual influences come from fine art: “I learned the world of shadows from Caravaggio and film noir, the distressing scenes from Goya and horror movies, and the double faces from Picasso.”

The Hungarian National Film Fund supported the film’s production, which is reported to have cost around USD$4.25 million.

Ruben Brandt, Collector opens in Hungary in November through distributor Mozinet. Lemon Tree Media has acquired distribution rights for China. No word yet on who might distribute in the United States.