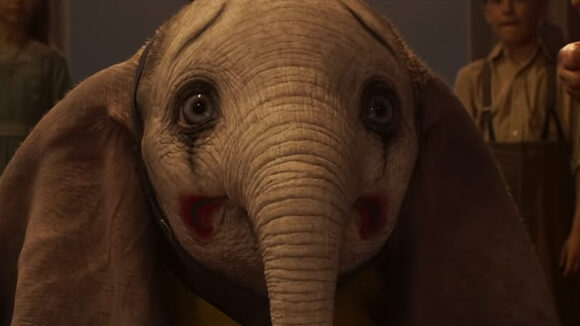 Directed by Tim Burton, Disney’s live-action reboot of Dumbo will open in U.S. theaters on Friday, March 29, but the reviews have already started flying in and they are not particularly positive.

There are currently 112 reviews of the film on Rotten Tomatoes, amounting to a score of 55%, which means it currently has a score only slightly better than Burton’s 2010 Alice in Wonderland.

Disney’s original 1941 Dumbo was only 64 minutes long, making it Disney’s shortest theatrically released animated feature. Burton’s retelling is almost double that at 112 minutes. Not surprisingly, many critics have pointed out that the effective simplicity of the source material is lost because this new version is trying to unnecessarily complicate the plot in order expand the narrative’s duration.

Another consistent complaint is regarding the excessive use of vfx beyond the movie’s protagonist and the lack of cohesiveness in the visual style of the world Burton built for the story, which is interesting given that the director has always been known for his indelible stylistic choices.

The vfx for Dumbo  were created by MPC, Framestore, Rise, Rising Sun Pictures, and Rodeo FX with Richard Stammers serving as vfx supervisor.

In his review for Variety, Owen Gleiberman wrote:

For The Hollywood Reporter, David Rooney wrote along the same lines:

The CGI work is polished, but like Disney’s live-action Jungle Book remake, the animals (all nonverbal this time around) fall into an artificial limbo between animation and photorealism — particularly Mrs. Jumbo and her offspring with their huge, cartoonish eyes (a reminder of Burton’s deadly 2014 feature, Big Eyes). Max’s comic sidekick, a capuchin monkey, is just an unfunny irritation.

The Wrap’s Alonso Duralde was also not a fan of the vfx in Dumbo:

[W]hile the digital creation of Dumbo himself has real weight and tangibility, so many of the film’s digital effects (and there are so, so many of them) have that glossy, shiny neither-here-nor-there quality that so often turns contemporary movies into visual mush. Not even the circus atmosphere provides any kind of flair.

Even those who were generally more positive about the film noted the lack of cohesiveness in its aesthetic. Writing for the The AV Club, Katie Rife observed:

[W]hile Dumbo himself is adorable, he isn’t especially Burton-esque, and neither is the rest of the film. Its sideshow and circus elements are period accurate but surprisingly lack any of that creepy-crawly Burton flair, save for isolated moments like a ghastly smash cut to a shot of a clown’s cackling face as fire burns around him.

It’s uncertain how Dumbo, carrying an estimated production budget of $170 million, will perform at the box office this weekend given that young audiences might not be as familiar with the nearly 80-year-old property. The live-action movie includes only a brief nod to Dumbo’s sidekick/mentor Timothy Q. Mouse, so the baby elephant’s cuteness will have to do on its own. Disney may be banking on Burton’s appeal as a filmmaker whose brand and fame often compensate for the content of his projects. The cast includes Colin Farrell, Michael Keaton, Eva Green, and veteran star Danny DeVito.

According to Deadline, Disney envisions a domestic launch in the $50Ms range from 4,200+ theaters, though external estimates have the film opening as high as $65 million. A launch even at the higher-end of estimates would place the film below most major Disney hybrid/live films based on animated properties, including Beauty and the Beast ($174M opening weekend), The Jungle Book ($103.2M), Maleficent ($69.4M), and Cinderella ($67.8M).